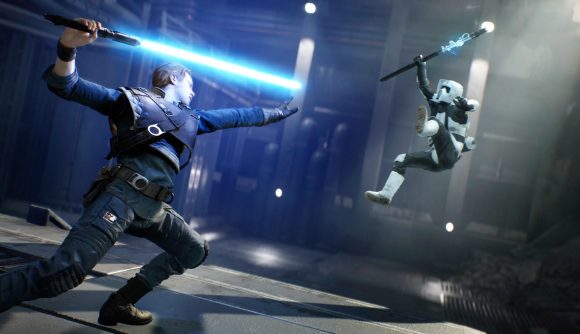 Star Wars Jedi: Fallen Order only launched last month, but it looks like publisher EA is already planning a sequel. Job listings on the company’s site reveal that Respawn’s Star Wars team is hiring for a “third-person action-adventure” game.

“We’re picturing someone who is passionate about the Star Wars universe and is invigorated by the idea of coding third-person action/adventure games,” says an ad for a senior software engineer (via GamesRadar), which also says Respawn wants to make an “incredible Star Wars experience”. The same team is also looking for a level designer and a senior character artist.

While this isn’t confirmation of a sequel to Jedi: Fallen Order, it does suggest the same developer is making a game in the same genres using the same licence. We’ve contacted EA for comment.

We enjoyed the first (and so far only) game in the series, with our writer Rich Scott-Jones awarding it an 8/10 in our Star Wars Jedi: Fallen Order review.

“Jedi: Fallen Order’s story is meaningless, and its cast take a bit too long to do or say anything interesting,” he writes. “There’s a general feeling of safety and déjà vu, and a lack of flair or daring. But it gets the most important things right: it’s one of the best representations of the Star Wars universe there’s ever been in a game, and in its moment-to-moment action it delivers on its core promise – it lets you feel like a Jedi.”