When it comes to the art and honour of lightsaber duelling, you’ll find fewer players more dedicated than Star Wars Jedi Knight: Jedi Academy’s various Jedi and Sith. I know this, as one of the first things I did in the game was to annoy one. After getting Jedi Academy for Christmas, following its release in 2003, I was so eager to dive in I never bothered to check if I spelt my username, Jedi Kight, correctly – nor did I bother to think of a better one. [Does this piece have anything to do with Jedis? – Ed.]

Jedi Academy has a selection of multiplayer modes, from Capture the Flag to an attack and defence game called Siege. The most popular mode proves to be Free-for-All with the lightsaber-only option on – so in I go. As abler duelists hone their craft in one-on-one bouts, I flail around in the corner as if I were trying to record a classic YouTube video. Before I can learn the difference between the heavy and light stances, an eager Sith challenges me to a duel. They mistake me for another combatant called Jedi Knight, who has a reputation as an exceptional fighter. I am not they, but I accept the challenge out of an awkward panic.

We shuffle to a nearby landing pad on the map as it provides an adequate spot to pit lightsaber against lightsaber. Others gather around the rim, turning the noble bout into some interstellar fight club. The Sith accelerates through heavy, light, and medium stances to land blows that are either slow but devastating or swift yet piercing. No one deserves to be outed like this. After a short scuffle, the truth becomes apparent, and the disgruntled Sith departs the ring as others dissipate. Robbed of any glory he might have earnt, the Sith leaves me to swish my lightsaber around as if I were summoning a more refined duelist with a wand. I never did meet the real Jedi Knight, but I won’t forget the day I nearly tarnished his legend.

The thing is though, Jedi Academy’s saber-dueling mechanics have never been matched in the years since. There’s a steep learning curve, but a deep and rewarding combat system waits beyond should you stick with it. A testament to the game’s combat is the myriad of dedicated duelists who still take to Jedi Academy to pit their skills against each other even today.

One of the things that has kept the game going for so long is its modding scene. I’ve been playing Movie Battles II over the past month as Star Wars Rise of Skywalker neared. The base pitch of the mod is that it introduces characters and locales from the films while balancing the gameplay with more delicate tweaks. After spending some time with it, I reached out to the mod’s project lead Tim – who doesn’t wish to share his surname – over Discord to find out more about the game’s community and the mod. One of the first things I ask is how Jedi Academy has persevered for so long. 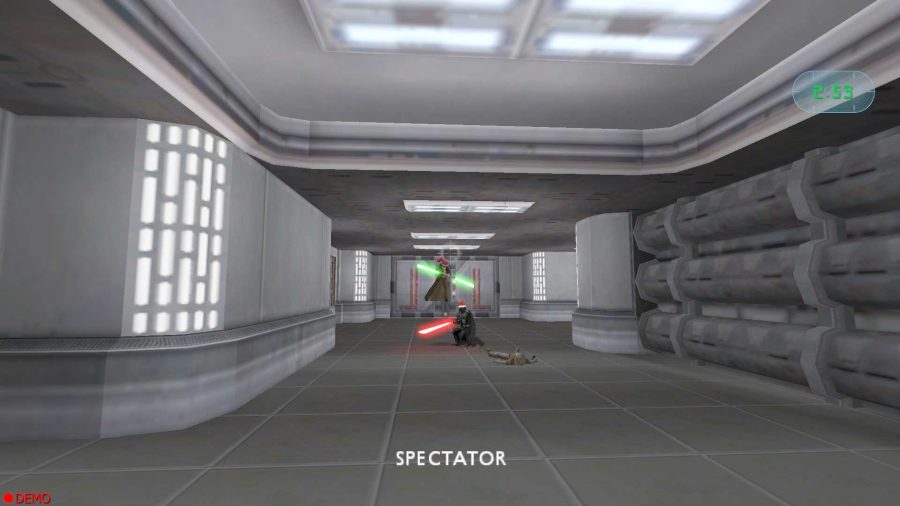 “I think there are a few reasons,” Tim, AKA Defiant, tells me. “For me, it’s the community. I wasn’t a very confident kid growing up and, like most people, I had some bad times during my teenage years. It was nice that there was always somewhere you could go to lose yourself in another world for a few hours. But without being alone, I think importantly for me, it was something that I was good at playing as well. The base game’s saber system was just the right mix of being accessible but challenging to master. Having an intense duel with someone was always fun, and you always get a little kick when you came out on top.”

Playing Movie Battles II is wonderfully nostalgic. You can take to the rain-soaked landing pads of Kamio or fight in the inner workings of the Death Star. The characters also evoke fond memories, as you can head into combat with Kylo Ren or Ewan McGregor’s Obi-Wan Kenobi at your side. As it’s Christmas, everyone is wearing Santa Hats, too. A nice touch, but such cosmetic tweaks are far outweighed by years of gameplay reworks. One of the Movie Battles II’s team’s main design objectives was giving people an incentive to try out being a Stormtrooper or Bounty Hunter over a Jedi or Sith. An ambitious goal indeed.

“What we’ve done is introduce the concept of classes, so in the base game everyone can do everything with some limitations around force powers based on having force points to spend,” Tim explains. “We expanded that in many ways – it’s more RPG-like with players having to decide which class they want to be, and then being able to buy weapons and abilities for that class.” 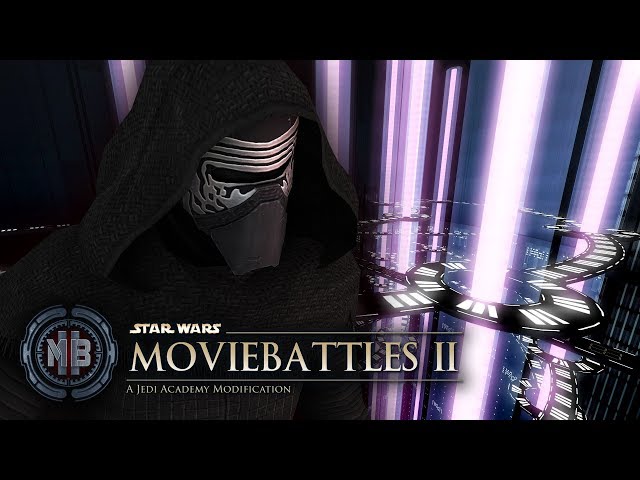 That’s not to say that Star Wars’ cinematic experience isn’t on everyone’s’ mind when tinkering with Jedi Academy, though. As Tim explains, game modes like Siege are rejigged to be more reflective of the scenes they take inspiration from.

“Siege mode involves teams battling over an objective – one team is attacking, one is defending – and that’s where MBII started,” he says. “So what we’ve done is to take the game and add a lot more depth to make it more squad and teamwork-based. That’s what we’ve been doing since we’ve started and where we will continue to go. It’s not just a case of adding more characters from the movies or locations, it’s trying to recreate the feeling of being someone in that battle.

Whether that be Han Solo fighting his way to plant a bomb in a building or being the Rebel soldier who can only try and slow down Darth Vader long enough for R2-D2 to make it to an escape pod.”Keeping Movie Battles 2 afloat is not without its challenges. The mod has been around for 16 years, and there was Movie Battles before that, too – though, Tim can’t recall how long that lasted. Naturally, when something has been around for so long, simply finding time proves to be an obstacle.

“This is a hobby for those of us that work on it,” Tim tells me. “The older you get, the less free time you have and it can be difficult to move things along. I am one of the more experienced developers both in terms of time spent on the mod and having professional experience writing software. But, having a full-time day job and needing to do all the boring things in life like paying the bills takes away from time that I would rather spend on what is a labour of love for me.”

Tim goes on to explain that there are challenges for the team’s younger and more inexperienced members, too. While they have more time, asking them to give that up to tackle the more mundane tasks can be difficult. “When you come up against a particularly difficult technical problem, a difficult bug to fix, that’s not anyone’s idea of fun, “he says. “So motivation on the difficult bits can sometimes be lacking, but we always muddle our way through in the end”. 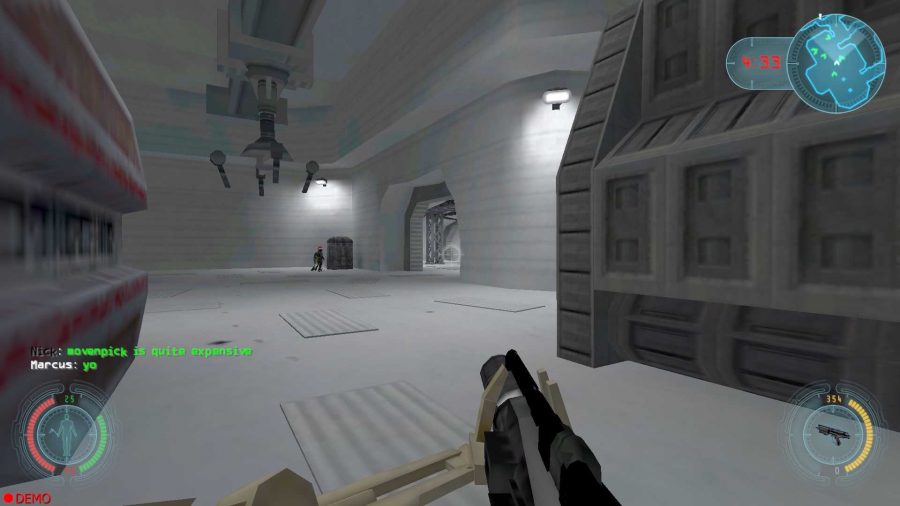 A lot has happened outside of Jedi Academy in the past 16 years, too. LucasArts handed over the reins to Disney, and EA snagged the rights to Star Wars games in 2013. While Star Wars: Knights of the Old Republic fan projects have been shut down in this time, Tim explains that Movie Battles II hasn’t run into any trouble yet.

We enjoy making our mod, and we like to see other Star Wars fans enjoy it too

“They leave us alone. Its a background worry that one day they won’t, and we’re sure they know of us,” Tim admits. “I work under the assumption that they know what we’re doing and I try and be as mindful as I can that they have no reason ever to need to speak to us. I would hope they see what we do as something that shows love for the franchise. Maybe we even help shift some copies of Jedi Academy. We try and steer away from things like the KOTOR remakes in Unreal because I feel that would put us at risk.”

As for the future, Tim explains that the slew of new films and TV shows gives the Movie Battles II team plenty of inspiration to draw upon. Content based on Rise of Skywalker’s promotional material is in the works, and the team is aware of The Mandalorian, too. Also, yes, I asked Tim about Baby Yoda. He’s sure they’ll appear “in some form,” though not as a playable character as they’re too small. Past that, a new interface and tutorial system for newer players are also being worked on.

“For us, as mod makers, we get a nice bounce in player count with a new movie a lot of the time, but just having new Star Wars content out there lets us keep doing what we have been doing,” Tim shares. “We enjoy making our mod, and we like to see other Star Wars fans enjoy it too.”