Star Wars is one of the most recognisable franchises in popular culture. An empire that spans from blockbuster movies to toys to books, there are hundreds of stories set in this universe. One such tale focuses on a squad of elite clone troopers sent on dangerous missions during the Clone Wars. Released in 2004, Republic Commando is a dark, uncompromising game that challenges you at every turn.

Yet, despite having an overwhelming number of positive reviews on Steam, the game has completely faded from public consciousness. What went wrong? And how did a game with so much promise become a hidden gem in the Star Wars enterprise?

Star Wars Republic Commando is in our list of the best Star Wars games on PC, and it’s in good company.

For the unfamiliar, Star Wars: Republic Commando is a squad-based, first-person shooter that puts you in the role of Delta Squad leader, RC-1138, aka “Boss.” Broken up across three core locations, the game’s journey tasks you with disrupting manufacturing on Geonosis, investigating a derelict spaceship, and freeing Wookies on Kashyyyk. The additional three clone troopers act independently, but can be given direct orders to follow, such as taking up sniping positions, regrouping, hacking terminals, and planting explosives. This creates a unique blend of fast-paced shooting and tactical gameplay that few Star Wars games have been able to replicate. 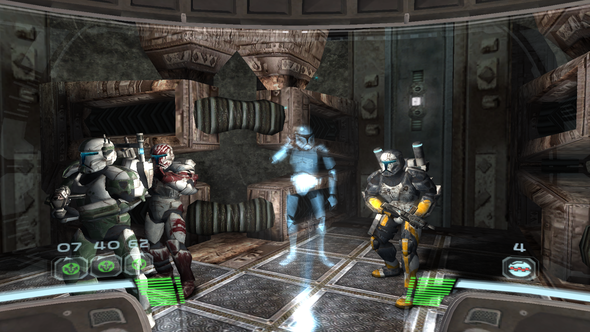 These mechanics are wrapped up in dark, mature themes that wipe away the surface veneer other Star Wars games exhibit. There is no opening crawl, the Jedi are simply an afterthought, and familiar iconography we associate with the series is pushed to the background.

“The game was always intended to be a grittier look at the Star Wars universe; we were inspired by the high-lethality of games like Rogue Spear and other Rainbow Six games, particularly in their multiplayer, which pitted teams of players against AI enemies (or against other players, I suppose),” Republic Commando’s lead developer Brett Douville explains. “We wanted to find a way to bring that sense of camaraderie and danger to Star Wars, and focusing on the day-to-day grind of a soldier seemed like a good way to do it.”

That ethos was reflected in Republic Commando’s difficult gestation. As development entered its final phase the team worked under the constant threat of redundancy due to internal restructuring brought about after the appointment of new LucasArts president Jim Ward. The ailing division was to be rebooted, and so Douville’s team began to shrink as tasks were completed and roles removed. 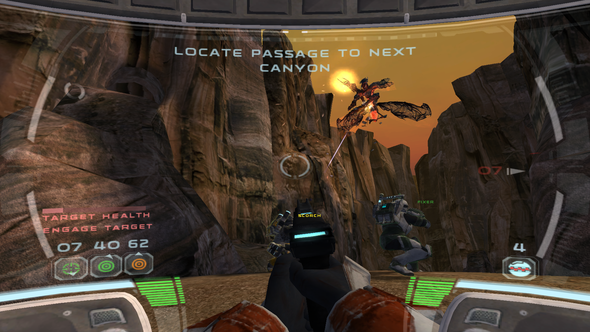 “Many of the folks on that team I had worked with throughout my LucasArts career, including EP Daron Stinnett, creative director Tim Longo, and level designers Greg Land, Harley Baldwin, and Troy Mashburn, artist Patrick Sirk.” Douville says. “But all of the team were really excellent at what they did.

“You work with people for years and especially as a lead you feel a lot of responsibility and pride in the way people change and grow over the time you know them. It felt like we were firing on all cylinders and had a team cohesion where the next game would have been something even more special. So looking back on that time is a bit bittersweet from that standpoint, but it was really something to see the degree to which the team pulled together under adverse conditions to make a game of which we’re all enormously proud.”

While these stresses were among the primary factors as to why Republic Commando never received a sequel, there was always the looming shadow of other Star Wars games. During the same release year, both Star Wars: Battlefront II and Lego Star Wars: The Video Game came out. While the latter was a vastly different take on this universe, Battlefront II posed some serious issues for the team making Republic Commando. Both games focus on the soldiers during The Galactic War, however, Battlefront II took players to iconic locations from the films. This was one of its prime selling points, as the idea of stepping into the shoes of a soldier during the battle of Hoth was, for many fans, irresistible. Additionally, the Battlefront series had already built a name for itself that was shaping up to be one of the defining games set in this universe. 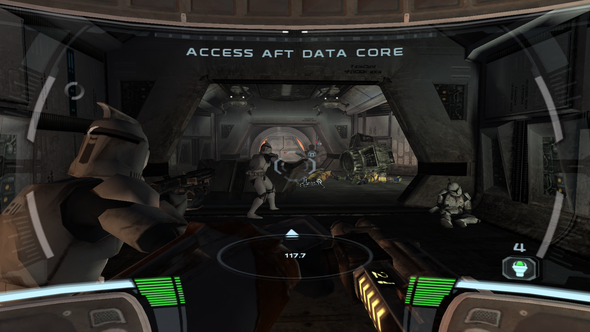 Douville and his team were well aware of the problems that Battlefront II posed for their game: “We knew the most about it and particularly as the new management came in they seemed to believe the most in it. Battlefront II got the significant marketing push whereas Republic Commando got almost nothing in that vein – it was a surprise dark horse sort of hit, building from word of mouth and strong reviews. And I think the new management also had concerns that Republic Commando would cannibalize sales from Battlefront II, particularly when we had to support multiplayer competitive modes due to market forces.”

The multiplayer component of Republic Commando that Douville describes is simply a collection of traditional competitive staples like Team Deathmatch and Capture the Flag. It lacks the tactical gameplay that the single-player delivers and fails to bring anything new to the table. All of the unique qualities that make this game standout are washed away once the battle is taken online – Republic Commando is no longer about reflecting upon the horrors of war and the people involved.

Be it no surprise, then, that the multiplayer component was one of the main problems many reviewers cited when Republic Commando released. The tragedy is that the game should not have had multiplayer in the first place – the pressures of keeping up with the ever-changing landscape of the game industry forced it into the game. It was a time when multiplayer was hotting up, and publishers were pushing for it in all their titles – a situation that is still around today. “It being late in the original Xbox cycle, retailers were only buying product that had Xbox Live support,” Douville explains. “I wish we either had been able to cut it or to find a way to get co-op done, but that was just beyond what we could do with the time and resources we had.” 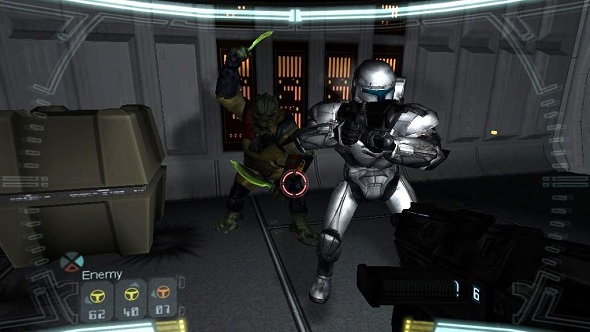 All of this created a perfect storm that helped push Republic Commando into the realms of obscurity. With little marketing, a forced multiplayer component, and troublesome development, Republic Commando never managed to gain a proper foothold. It is a shame, since Douville is confident that a sequel would have been produced if all of these damning elements did not perfectly align. “Had the team not been broken up by the restructuring I feel certain we would have rolled right into whatever the sequel would have turned out to be,” he says. “The team might have shrunk a bit at the beginning because we would have been going into pre-production on a game which would have been on a new generation of console hardware when it shipped, but we had built a lot of tools and technology and a really capable team. It’s a shame that investment was thrown away.”

There has never been a true sequel to Republic Commando and fans have only heard small rumours of a follow-up coming down the line. Yet, there is still a glimmer of hope that the game’s outstanding single-player could eventually surface. Even though much of the Star Wars Expanded Universes’ stories are no longer considered canon, it turns out Delta Squad still is. They briefly appear during an episode of Star Wars: The Clone Wars television show, titled “Witches of the Mist.” Despite everything Douville and his team have gone through, then, there is still a small chance this squad will make a return in videogame form. All we can do is hope.

{"schema":{"page":{"content":{"headline":"Star Wars: Republic Commando could have saved us from Battlefront 2, but never got the chance","type":"news","category":"star-wars-republic-commando"},"user":{"loginstatus":false},"game":{"publisher":"LucasArts","genre":"FPS","title":"STAR WARS Republic Commando","genres":["FPS","Strategy Gamer"]}}}}