Star Wars Republic Commando’s place in the pantheon of Star Wars games is underappreciated. Its lack of playable Jedi and Sith characters, coupled with the competition of Star Wars Battlefront II coming out in the same year, mean that it’s often overlooked when compared to its peers.

Initially released in February 2005, Republic Commando’s development and subsequent launch were marred by studio layoffs at the now defunct gaming division of LucasArts, dismissive attitudes from some LucasArts’ executives, and constant setbacks throughout its evolution. The development team wasn’t able to realise its full vision for the game. And yet it’s the resulting simplicity that makes Republic Commando such a fun, tactical first-person shooter.

You take on the role of RC-1138 – aka Boss – who leads a team of clone trooper commandos known as Delta Squad during the Clone Wars period. You’re tasked with carrying out various missions across three key locations in the fight against the Separatists. Your AI squadmates – RC-1162 (Scorch), RC-1140 (Fixer), and RC-1107 (Sev) – are free to act however they like, but your ability to direct each commando, or all three simultaneously, is a huge part of Republic Commando’s brilliance.

The order system could have had the potential to be overly complicated. This isn’t the case as a single key push lets you instruct them to carry out your orders. Telling them to take up sniping or grenadier positions at specific locations, refilling their health bars at bacta stations, and conducting door breaches are just a few of the commands you can issue. A straightforward key press and your order is executed immediately. It makes the NPC co-op mechanic feel seamless, and the firefights that come out of it are simple yet satisfying in a way few other games are. 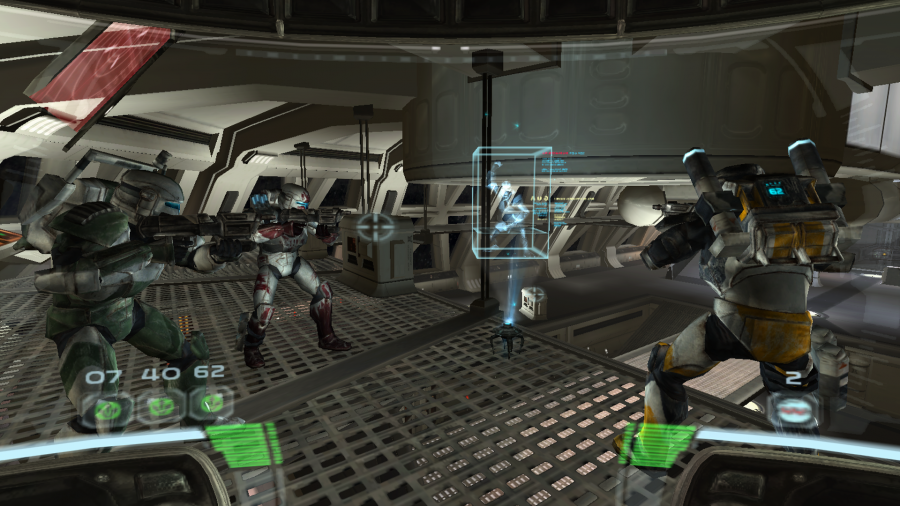 Speaking of firefights, the development team’s decision to give you a modifiable assault rifle allows you to be combat ready for any scenario. The DC-17 blaster comes equipped with a standard rifle attachment, but this can be swapped out for a sniper rifle barrel or a grenade launcher accessory.

There’s no need to spend 15 to 20 minutes standing at a workbench as you decide how to modify your weapons here. Instead, a couple of seconds is all it takes to alternate between your attachments. It’s a feature that keeps Republic Commando’s combat flowing and, with each enemy type requiring a different approach, ensures a fluid playing experience no matter what the game throws at you.

To maintain its simplistic approach, Republic Commando also forgoes the addition of skill trees. At the time, these were typically reserved for RPGs – MMO or otherwise – but have since found their way into just about every single-player game, as we all know. Without the need to upgrade your arsenal, health, or shield bar, or give yourself other boosts, you and your commandos don’t become overpowered at any point. This helps Republic Commando to remain a fair challenge, particularly in the later chapters when, at times, you can feel overwhelmed by the number of enemies trying to stop your progress. While its more expansive brother – Battlefront II – elected for vast maps that allowed up to 40 players to take part in a single match, Republic Commando stuck to the linear level approach that had been a feature of games for generations. It was a decision that wasn’t revolutionary, but it was the perfect fit for this squad-based title. In an era before achievements and trophies were the norm, there wasn’t a need to develop open-world or sandbox environments for players to explore. Instead, the linear levels kept you on the straight and narrow, and ensured that you focused on the game’s plot.

To boldly go? Fly around the best space games on PC

Not that the story itself is difficult to follow – it doesn’t need to be. Delta Squad’s missions are the priority for them and, in turn, you. As long as you have a directive from your superiors, you always have another assignment to complete. In keeping with the linear level aesthetic, these are always easy to follow and you never find yourself having to backtrack after taking a wrong turn. Ammo, secondary weapons, and enemies are always present as you progress through each mission too. You never have to venture off exploring to refill your guns, or track down that elusive final opponent that stopped you from being given the next assignment.

Star Wars Republic Commando isn’t a perfect game. Its slightly restrictive levels and, at times, repetitive gameplay mean that later missions can feel a bit samey. Its simplicity and ease of use, resulting from the development team’s lack of funding and time, is what helps to set it apart from its competitors in the Star Wars game library.

At a time when single-player games have become bloated with loot, microtransactions, levelling mechanics, and post-launch content, it’s refreshing to return to a game that does without that. Not all games need to be grandiose titles that take over 50 hours to complete. Sometimes, basic is best, and Republic Commando is proof of that.