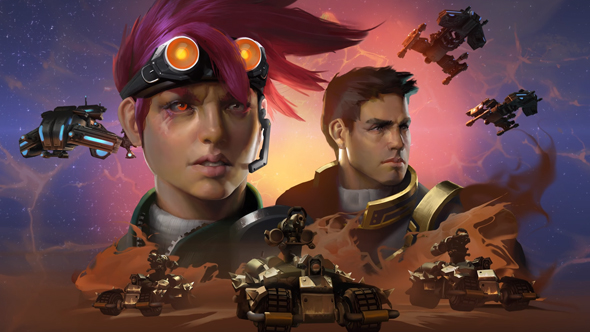 Han and Horner make up the new commander of StarCraft 2. An odd couple marriage put together after a lucky poker game, the commander brings together mercenary queen Mira Han and Terran admiral Matt Horner for an eclectic set of gameplay options. That means a blend of fast-moving, high-damage mercenary units and more tank-like military units.

Check out the best strategy games on PC.

One example of this blend is the bomber platform, which is a cheap manufacturing plant from Han intended to rapidly produce Horner’s strike fighters. They can be sent far across the map, and operate as an interesting blend of unit and ability. The bombers can be shot down if they go into dangerous territory, but that just means longer cooldowns on their deployment as they get reconstructed.

Han also brings an assault galleon – a space-faring pirate ship that can be upgraded to launch assault drones.

Han and Horner’s respective ults also reflect their respective personalities. Horner’s ultimate is Call in the Fleet, which rains down destruction from above – but rather than an AOE strike, it’s a series of precision strikes against the enemy. Han’s ult is Space Station Reallocation, which takes a far more brute force route, teleporting an entire space station into the ground for explosive instant deaths.