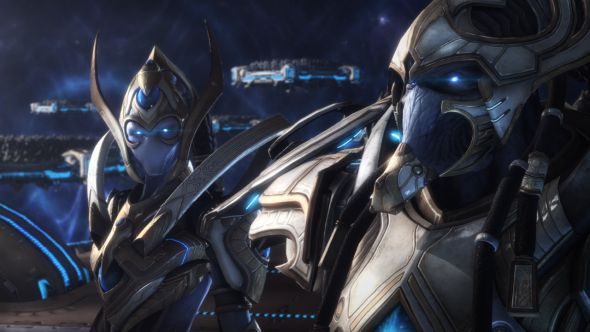 Update: Alex “Neeb” Sunderhaft becomes the first non-Korean StarCraft II player to win a tournament in Korea, and the first StarCraft player to do so in 16 years.

In one of the biggest upsets this side of the NBA finals, a Korean SC2 tournament has been won by someone not born in the country. 18 year old Neeb from the USA beat Trap 4-0 in the Grand Final of the Kespa Cup, a tournament stacked with the best South Korea could offer.

Read more: the best strategy games for the best humans.

In a fairly quick finals, Neeb dismantled his Protoss opponent in the mirror match, where he’s classically been very strong. A fortunate bracket of facing two of that match-up in the semis and grand finals was helpful, but he looked absolutely unstoppable in three of four games, with the last one being a much longer fight where Neeb’s far superior army control shone through. Here’s that final game.

Neeb will now attend BlizzCon as the top-ranking foreigner by points, giving him a fairly easy group with multiple Protoss opponents and one foreign Zerg. In a post-tournament interview he said that he believes if he plays as he did here, he can take that tournament as well – making him the defacto best player in the world, and easily the best non-Korean StarCraft player of all time.

Original story:Asdiscussed recently, there’s one rule in eSports: if the South Koreans are playing, the South Koreans are winning. This is true most strongly in StarCraft, where the nation has completely dominated the highest level of competition throughout its lifespan. Not since 2000 has there been an individual league in the nation that hasn’t been won by one of their own. Now, one 18-year-old American is on the brink of breaking that streak, having already made history by getting to the finals of the KeSPA Cup.

Alex Sunderhaft, better known as Neeb, has been at the top of foreignerstandings – that’s anyone outside South Korea to you and me – for most of this year, and is easily the best from the USA. However, his performance in the 2016 KeSPA Cup is his greatest result to date, managing to progress through what was largely regarded as a group of death with a perfect record before beating Zerg player Pet in the quarter finals and fellow Protoss Stats in the semis. He now faces one of TY and Trap in the grand final later today. Stream is below.

Of course, foreigners have won major tournaments before, but never inside South Korea, playing for large stakes, with lots of players from that nation there. Even at tournaments in the US and Europe, the likelihood of a dozen foreign players managing to beat whichever Koreans are able to compete is very low, and there are only a few players that have managed it over the game’s history, most notably Stephano.

The last time anything even approaching this happened in StarCraft II were the very earliest tournaments for the game in 2010, before the majority of South Korean pros switched over from Brood War. At that time, foreigners managed a couple of quarter-final placings. In Brood War, an OnGameNet Starleague title was won by Canadian player Guillaume “Grrrr…” Patry in 2000. This was at the very genesis of eSports itself, before fundamental ideas such as micro and macro were properly understood. It also remains the only time an individual title was claimed by a foreign pro in Brood War’s history.

A win here would put Neeb far out of reach at the top of the Foreigner Circuit standings going into BlizzCon, where he is already guaranteed a slot. It will also make him the best hope of a non-Korean world champion at that event. For more info, have a look on Liquipedia.