The semi-finals have just finished up for the third and final WCS season of the year here in Kraków. Day 1 proved to be one of the most exciting e-sports events I’ve ever witnessed and everyone came into day 2 hoping for even half the amount of hype or number of upsets, turnarounds and unexpected moments as yesterday. Any combination of winners would generate an impressive finals but there can be no denying that MaNa – who was lifted into the air by fans when he won his quarter-final match – was the one the people were here to see win.

But first there was the small matter of The Impossible Protoss, Lilbow, facing off against heel Zerg extraordinaire Zanster in the first semi-final of the day. 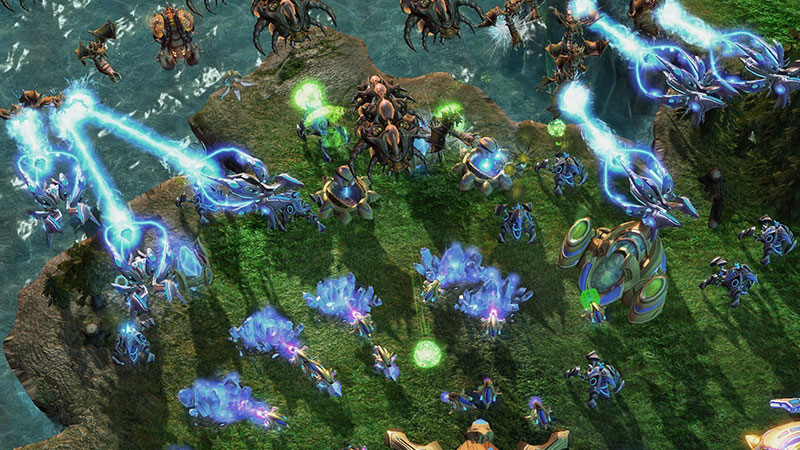 Should you watch this series?Yes, a back and forth between two amazing players.

Game 1 began with dueling chants for the players from the crowd. “Zanster Zanster Zanster” would be echo’d a minute later by “Lilbow Lilbow Lilbow” and then back again. It’s not something I’ve heard at an event before and the strength of this Polish crowd cannot be underestimated. There should be an event in Kraków every year. The game itself showed a lot of respect between the players as they both started safe and scouted well, making sure they weren’t going to be caught off guard by any shenanigans. Lilbow went for an early Oracle into a Sentry push, arriving at Zansters bases just before the Zerg managed to hit the key technology of burrow-move Roaches. Constant aggression from that point spelled the end in a protracted fight as Lilbow’s forces continued to grow and Zanster was unable to construct his own deadly ball.

Lilbow went for the cheesiest play imaginable at the start of Game 2, quickly throwing a Pylon down in Zanster’s natural to cannon rush him with stationary towers that would make the area unminable. Zanster’s reactions were once again his strongest quality as he pulled Drones from his main base to stop the early attack and positioned them perfectly to prevent the cannons ever going down. Realising his rush would never work now, Lilbow retreated to set up a second base. From there Lilbow’s tech was very slow, allowing the Zerg player to take the iniative and push to his opponent, noticing the mass of Stalkers that were being created for a timing attack based around Blink. He delayed an attack buff by sniping a key Pylon, letting him set up a defense. The battle was fierce but in the end Lilbow wasn’t able to reach a decent number of Stalkers and some aggressive usage of Blink left his small force defenceless. With the writing on the wall of his failed attack, he GG’d out.

Zanster returned the cheesy favour (or should that be flavour?) in Game 3, going for a 7-pool, the fastest rush possible. Some good camera work from the ESL tournament organisers let us see the panic in Lilbow’s eyes as he noticed the mass of Zerglings already heading for his base as early as three minutes into the game. He sured up a wall with defensive buildings, then abandoned his natural expansion and built a cannon in his main base. Some great micro fended off the rush, but behind it Zanster had managed to transition to building Drones and Queens, letting him stay in the game. From there the game got even weirder, with both players ending up with forces in odd positions around the maps. Lilbow took the advantage, killing off third base after third base like some sort of twisted Zerg farm. His economy never having truly caught up from his aggressive opening, Zanster couldn’t reach the higher tech units he needed to fend off even the very delayed Blink-ball Lilbow once again brought to the fore. Lilbow took another game, now just one win away from the Finals and his best chance at Blizzcon.

After a long break, Game 4 began slowly, but Zanster managed to take the first advantage quickly with an early attack that caught all of Lilbow’s Sentries out of position. It proved a critical misplay in the game, letting Zanster pull further and further ahead by clever expansion and good teching. He gathered a mixed force of Roaches, Hydralisks and Zerglings and headed for Lilbow’s bases, splitting his vastly bigger force into smaller groups to attack everywhere at once. Unable to handle even a portion of the army, Lilbow fought for a long time against what seemed to be an apprehensive Zanster who was obviously making sure what happened to Hydra wasn’t repeated. Eventually he moved in with his huge army and picked off building after building until the game was over. Game 5 was on the cards.

Dueling chants returned for Game 5 as both players went very standard, having already exhausted their scummiest builds. Great control from Zanster was showcased again as his Zerglings survived engaging Lilbow’s first Zealot. Later scouting revealed Zanster’s fast-tech plans and meant the time was now for Lilbow to move in before he was outmatched by Hive-tier units. Zanster made a clever move into the main base to delay Lilbow’s forces, but lost a lot of units doing it. When Lilbow finally made it, there were Infestors and Ultralisks waiting for him – but not enough. Clever use of harmless hallucinated Archons allowed his army to pour fire onto Zanster without any reply and the Zerg had to concede.

A note on the crowd at this point. Lilbow got a massive cheer as Zanster sat, dejected, in his booth. But post-interview, when Zanster left for what would normally be a quiet walk of shame, there was as big a cheer for the defeated player. He played good games and is an incredible talent, and the Polish crowd had more than enough time for that and gave him a standing ovation in response. It was great to see and reconfirmed, for me, that the people of Kraków are the best audience we could ask for.

Lilbow advances to the Grand Final. 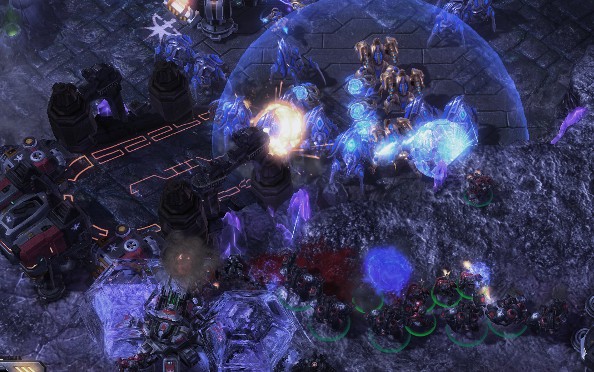 Should you watch this series?You can probably guess, really.

Game 1 was like watching some sort of loop. ForGG dropped MaNa’s bases again and again and was fought back again and again. Each time he took a big army hit and never seemed to be making a large enough impact on the worker counts, tech or production of the hometown boy. The first Mine managed to kill a lot of probes, but past that it was a whole lot of death for his airborne forces. Once the key High Templars and Colossus were out for MaNa, there was little ForGG’s starved army could do to stop it. MaNa confidently marched around the map clearing up attacks before they could reach his own homeground and then headed into ForGG’s bases. The crowd, unsurprisingly, appreciated the win.

The opposite seemed to happen in Game 2. After an early mis-scout meant ForGG wasn’t prepared for a quick Oracle, he defended the first push effortlessly, losing almost no units. From there his drops were much more effective, taking out key Pylons to depower Gateways and charging into expansions when MaNa tried to defend his main. After that, MaNa managed to get to a key number of Collosi before ForGG was ready to pump out the Vikings that effectively counter them. When the armies engaged the Colossi got off many powerful shots on the massed bio force before they were taken down. It was balanced on a knife edge as ForGG pulled dozens of SCVs into the meat grinder, trying to buying his forces seconds to regroup. It was successful and MaNa was beaten back, his reinforcements ineffective as the Marine and Marauder count once again returned to critical mass. From there ForGG was ahead, and a disgusting Widow Mine destroyed 12 probes in one shot, sealing MaNa’s fate as his last attack crumpled.

In one of the best games of the WCS so far, Game 3 started with ForGG getting well ahead due to managing to keep his strategy hidden, quickly producing Bio units and trying to take out the natural expansion. Despite being surprised, MaNa’s defense was impressive, waiting until the very last moment to use his Sentries and protect himself, losing probes in the process but never quite getting to the death point. ForGG’s first big push seemed deadly, taking out a whole base, but at the very last moment Archons and Colossi came into play, pushing him back. He retreated well throughout the game, always keeping large numbers of units alive. MaNa remained on the defensive, another wave of Terran forces, this time truly all-in with SCVs, crashed against his now steadfast and varied army. ForGG did this a couple of times before he was clearly behind, but every fight was balanced on the micro of either player, with poor Viking control and excellent Blinks eventually being the deciding factor.

Just in case you were wondering if this tournament could get any more ridiculous, here comes Game 4 of MaNa vs. ForGG. MaNa headed straight for Blink stalkers, hoping to hit a key timing and destroy ForGG quickly. The Terran’s scouting was on point and he spotted it with his Reaper that managed to escape on 1HP. He tried to counter with a quick attack with his early Marines and Marauders but good Blink micro blunted him. MaNa moved out with a large force just as ForGG went for a drop and it quickly became a ridiculous base trade. Neither player could pull ahead, MaNa not having enough resources left to build a Nexus but a far more powerful army for sweeping the map. A single Factory floated out of reach as MaNa managed last second saves to keep at least one building alive. The referees paused and moments later the game was concluded – as a draw. Game 4 would be replayed.

Game 4 Part 2: Revengeance began with good harrassment and good defense by both sides. Widow Mine drops killed a few Probes while an Oracle ran roughshod over ForGG’s mineral line. It then turned into a drop game for ForGG, but he once again found himself unable to make significant impact with each attack. MaNa once again proved impenetrable, this time with the Phoenix required to prevent the draw. He raided ForGG’s base and destroyed all of his economy before smartly withdrawing to make sure his army could contend with the remnants of the Korean Terran. Archons proved the deciding factor, AoEing every last blockade between MaNa and the finals.

MaNa advances to the Grand Final. 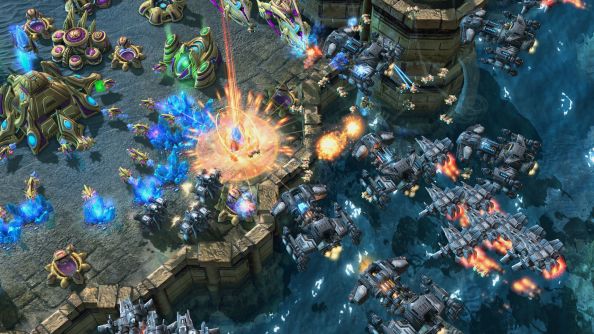 Our final game of the day will be MaNa vs Lilbow. In one of the best tournaments of all time, the two biggest stories clash at the end of it all. The only possible flaw in the perfect script is it being a Protoss mirror, but it could all be over in four two minute games and this crowd will still be losing its mind. Don’t miss it.

But first, the Legacy of the Void cinematic and release date reveal event is kicking off in just a few minutes. Watch it on the Twitch StarCraft channel.