Blizzard has announced the next co-op commander coming to StarCraft 2: everyone’s favourite cigar-mucher, Tychus Findlay. A key character from the Wings of Liberty campaign, Tychus finds himself back on the battlefield as part of StarCraft 2’s most interesting co-op faction to date. Forget buildings and hundreds of units; Tychus is all about small-scale hero combat.

“Tychus only builds a faction: a small group of five very elite units that you micromanage on the battlefield,” co-op designer Kevin Dong at Gamescom 2018 explains. “You recruit four out of eight very specialised outlaws to help support Tychus. In addition, you can upgrade your gear to further enhance them.”

That means when playing as Tychus you’ll be controlling five units in total: no more, no less. The design takes direct inspiration from Blizzard’s work on the main StarCraft 2 campaign, which features several missions that play closer to an ARPG than they do an RTS. As in those missions, each one of Tychus’ squad members will feature their own powerful abilities that more than make up for their lack of battle brothers and sisters.

The eight options are all hero-specific recreations of classic Terran units. There’s a Reaper, Warhound, Firebat, HERC, Marauder, Ghost, Spectre, and medic, and you need to lock in the four you take at the start of a match. 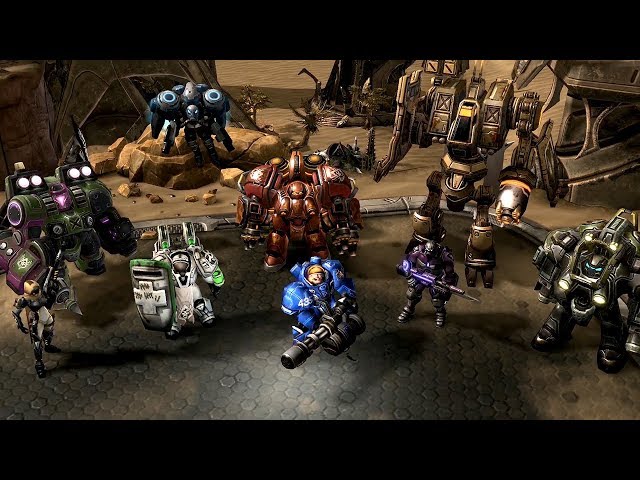 The Firebat option is none other than Miles “Blaze” Lewis, who you may recognise if you’re a Heroes of the Storm fan. “He’s a Heroes hero that was originally based on the StarCraft Firebat unit,” Dong says. “We’re bringing him back into the StarCraft fold and putting him into the Tychus command roster. Like his Heroes counterpart, he can throw oil and light it on fire, so he’s perfect for roasting smaller units like Zerglings.”

Combining the abilities of each of your squad members will be a key element in achieving victory with Tychus’s faction. “There are outlaws that synergise well with each other,” Dong explains. “Tychus has an implosion grenade that sucks everyone in, and then you have the Spectre who has an AoE ability. So Tychus stuns, and the Spectre does a lot of damage, so it’s a combo. There’s no hard synergies, but there are light ones.”

Most exciting, though, is Tychus’s Top Bar ability to call in an Odin – one of the biggest units in the game. “It’s possibly the strongest weapon in the entire Terran arsenal,” Dong says. “In addition to being physically strong, the Odin can also launch the largest nuke we’ve ever put in the game with the ability Big Red Button.”

These elements promise a co-op commander that will really shake up how you interact with StarCraft 2’s objectives, as well as offer a very different way to play the typically unit-dense RTS. “A lot of the decision making surrounding Tychus is which of the very specialised outlaws you recruit, which gear you upgrade, and the order in which you get all of this in,” Dong says.