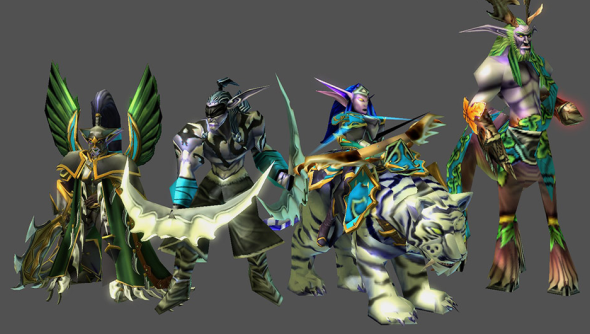 Blizzard have released all of Warcraft 3’s assets to Starcraft 2’s modders. Everything from the hero units of all four races down to the fence post models have been made available. It’s not just models and animations – spell effects, music, ambient sounds, and the interfaces have been made public, too.

The Arcade community now have everything they need to go and remake Warcraft 3 in the much better Starcraft 2 engine.

“We’re excited to announce the models and assets that made Warcraft III an amazing universe to explore are now available in the StarCraft II PTR,” say Blizzard. “This brings over three thousand new materials for the amazing Arcade development community to work with, including new hero models for the 4 primary races, all of the original Warcraft III models including neutral creatures and their sounds as well as doodads, structures, spell effects, ambient sounds, music and custom user interfaces for each race.”

The assets are only available in the PTR for the time being but they will soon be released to the general public and, when they do, Blizzard will spotlight the best creations in a ‘Memories of War’ collection.

Hopefully, alongside a remake of the original game, we’ll see modders make other parts of Warcraft’s lore in the engine, whole new sections of Blizzard’s world we’ve never seen in a game before.

I’ve my fingers crossed that we’ll see high res textured versions of these models created by the community, making for a better looking version of Warcraft 3.