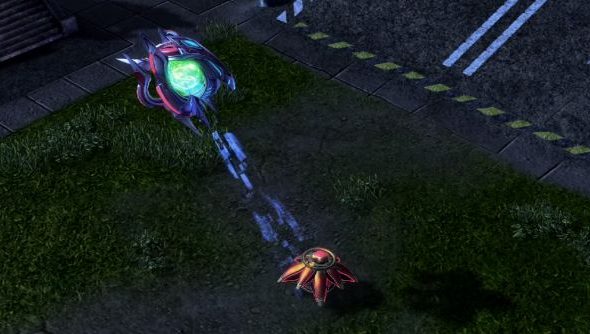 With any new expansion for Starcraft 2, you can be sure that there’ll be new units to wreak havoc with in multiplayer (and the campaign). Each of the three races will be receiving new tools of destruction in Legacy of the Void, and also applying updates to existing ones too.

We’ve got video previews of the new units and updates for you to take a look at, and start planning which race you’ll be playing going into Legacy of the Void.

While these videos are official, Blizzard have stated that not everything is set in stone yet, so keep that in mind.

The Disrupter may seem easy to avoid, but in the middle of a big engagement it can be easy to miss these things before they destroy your squishy units. They’ll also be great when paired up with a Warp Prism, to enable sneaky base ambushes targeting enemy workers, who are naturally bunched up.

The Immortal’s passive shield ability is now gone, instead replaced with an active damage reduction shield. The aim was to provide more of a balanced engagement between certain units, like the Siege Tank, where it wasn’t such a “stomp”.

Warp Prisms can now pick up units from a distance. Expect to see a lot of drop-micro in the future.

Oracles can now put down a stasis trap, which upon detonation traps enemy units for a lengthy amount of time. Detection against these traps will be a must, less your army be cut in half and rendered useless during a big fight.

Finally, the Tempest and Carrier have received some love. While the Tempest can no longer fire at air units, it has a new ability that will apply a heavy damage over time effect on a unit. The unit will be forced to either sit there and take the damage, usually killing it, or try and kill as much as the enemy before it gets destroyed.

Ravager’s are a new Zerg unit that use a unique ability called Corrosive Bile – a long range mortar like ability that hits for a huge amount of damage. It has a delay before hitting the area, which is also marked, so units do have time to move out of the way. It can also destroy Protoss force fields. Combo this with the Infestors Fungal Growth for some serious damage; even on air units.

The Lurker is also making a return. Their burrowed units that can deal massive splash damage and at extreme range; out-ranging the majority of defensive buildings.

Corrupters are getting a new ability called Caustic Spray, which deals damage to ground units and structures. The damage increases over time, so it’s great against highly immobile units.

Infestors also get a new ability: Aggressive Mutation. This is a straight up damage buff to other Zerg units, making them even more deadlier.

Swarm Hosts can now spawn locusts on the move, albeit at a much slower rate. The locusts can also be upgraded to a flying variant to siege bases from a distance.

Finally, Nydus Worms are getting a huge buff. Previously, the Nydus Worm could be damaged as it was surfacing, usually resulting in its quick demise to a map aware opponent. This isn’t the case anymore, and they can now only be damaged once they’re fully emerged, allowing Zerg players to follow through with their army.

The new Herc can latch onto enemies and zipline straight towards them; closing the gap and dealing decent area damage. They can one-shot Banelings too, and are quite effective at swarms of weak units.

Cyclones are a new mech unit that can engage targets at long range, and while on the move too. They’re perfect at kiting slower units, and enemies that wish to deal with them will need to use gap-closers – like the aforementioned Herc – to engage and destroy them before they diminish their force with a barrage of missiles.

Siege Tanks can now be picked up by Medi-vacs in their sieged up state, and retain it when they are dropped. As before, expect to see more drop-micro going into this expansion.

The mighty Thor unit can now enter a repair state, rendering it unable to move or attack, but continuously regaining its HP. Cycling this mode between multiple Thors can prolong their life on the battlefield.

Banshees and Battlecruisers also received an update. Banshees can now deploy a small speed burst to outrun enemy threats for a short amount of time. Battlecruisers on the other hand can use a huge energy draining ability to teleport anywhere on the map.

Which race do you like the look of going into Legacy of the Void?