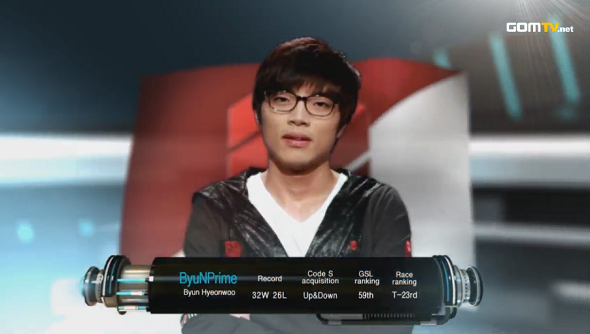 Korean Terran ByunPrime, has defeated the once almighty Nestea in a shocking 3 – 0 defeat at the Ro8 stage of Code S. The other favourite – DongRaeGu – managed to prize a victory from the hands of Swedish Zerg, Naniwa, advancing along with Byun to the notoriously challenging Ro4.

Byun has in the past, buckled under the pressure of facing opponents such as Nestea; “For some reason, I get really nervous in official matches and lose. Even today, I was worried that nerves would get to me.” He explained in a post match interview with TeamLiquid. “…but looking at TiG’s winner predictions, I saw that one of the reporters predicted my victory. That article gave me the confidence I needed.”

The Terran also commented on the well known issues with TvZ matchups, stating that “In late game, battlecruisers supported by ravens can beat Zerg. The solution has been found.”

DongRaeGu also sought and found victory against Naniwa – who was the only non-Korean player left in the tournament. Blaming Naniwa’s deficiency in PvZ games for the win, rather than his own skill, the Zerg took the series 3 – 2. DRG, in set five, risked using Hydras costing him the game – “…it seems hydras are still the symbol of defeat. From now on, unless it’s a special situation, I will never use hydras.”

DongRaeGu now goes on to face MC and Byun faces Seed in Ro4 of Code S.