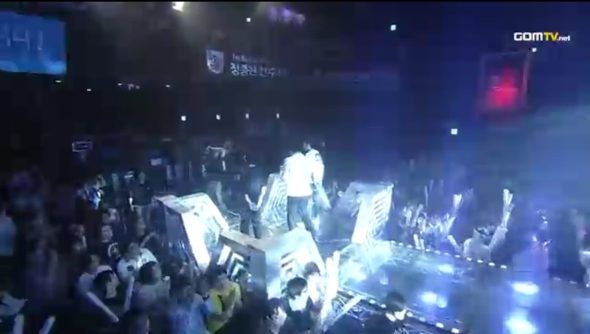 In the arena, the lights dim. The streamers falter in their enthused flapping. There’s a pause, where only the blue filler light illuminates the quieting crowd.. silence. Then the soft metal kicks in, and a small man in a white tuxedo appears talks shouting very quickly in Korean. A picture flashes up on the screen, thirty feet high. It’s… LG-IM-MvP. He looks noble and haughty. The presenter, perched on a podium in the middle of the crowd, lists MvP’s qualities like he’s on sale; three times winner, indefatigable terran warrior, despoiler of women… He is here in the GSL 2012 Season 2 final, the world’s most important Starcraft 2 league, to play against the rookie Squirtle for a roughly $40,000 first prize.

What follows is unbelievable.

To much applause, MvP then floats onstage, on a box moving through the dry ice. He’s totally impassive, his face and arms slack as he trudges up the gangway to the presenter’s podium. Next his opponent, the underdog, Startale_Squirtle. He appears on screen, his hands dancing on a keyboard. He too is floated in to a hard sell from the presenter; rookie, came from nowhere, representing hard-done-by protoss. Despite trying to maintain the ideal cool image (even having removed his glasses), he’s visibly perturbed and almost topples off the moving box, then his excitement comes through. Smiling and shaking hands with the crowd, he walks up to the podium, before reclaiming his cool.

it’s gametime. The two contestants shake hands, smiling and bowing, and walk back to the stage, while we get to watch a little movie where they smacktalk each other. Basically, Squirtle wants to be a ‘Royal Roader’ – that is, a rookie who wins the tournament the first time he qualifies. Squirtle thinks he can do this and beat MvP by 4-1 or 4-2. MvP may have slipped down the rankings a little (and cheesed a few victories) but is still three times champion, so this is ambitious. Looking at the numbers, MvP has won 70.8% of his matches against Protoss. Meanwhile, Squirtle only beats Terran 46.4% of the time BUT his first significant victory was against MvP, where he made his name AND he has a much better record on the first map they’re playing on, Daybreak. He’s also known for preparing specifically against individual opponents.
Game on. The first map ends fast and weird in an early abortive base trade, where both players attacked left their bases undefended and attacked simultaneously, but Squirtle’s stalkers were surrounded by SCVs and killed, while MvP’s hellions and marines are in Squirtle’s own base, causing chaos. It’s a terrible start and the next two games go MvP’s way too, with Squirtle losing the first on poor build management and the second on early economy damage. At game four, Squirtle turns it around as MvP’s decision to go for early tanks means his tech development falls way behind Squirtle’s, and he can just walk through his defences. Squirtle rolls him over in the next two games as well, as MvP keeps trying to go for long term development – always a bad idea against Protoss. The fifth game ends in a battle between ghosts, battlecruisers and stalkers, templars, archons, vod rays and a mothership that Squirtle wins easily. The sixth battle was tougher, with MvP pinning Squirtle in his base after Squirtle had thrown two waves of troops away, and destroying his third. Squirtle slowly came back into the fight, harassing MvP’s SCVs with warped-in zealots. Eventually, it became clear to MvP that Squirtle wasn’t really pinned in his base any more – he charged in, but it was too late.

So it all came down to the seventh round. Unpredictable as ever, MvP went with yet another build strategy, a super-early offensive, building just barracks then hurling all his SCVs and troops at Squirtle as early as possible. Squirtle fended off the attack, leaving MvP with just five SCVs left. Squirtle didn’t take advantage of this though, and managed to lose most of his troops to spawning marines as he attempted to take down the barracks. When MvP built a bunker next to Squirtle’s Nexus it was all over and.

And the crowd went wild.