Season 4’s milestones have been glued into place; its bonus pools drained and cleared of insects. In the last few hours, StarCraft 2’s new ladder season has begun and players have tackled their initial placement matches with renewed gusto.

Before the end of the day, they’ll also likely come up against some of the five new maps added to both the 1v1 and 2v2 ladder pools.

“We’re adding three maps to the 1v1 pool in Season 5, and as always, making additions to the ladder pool means we’ll be removing a few of last season’s maps,” write Blizzard. “Since we’re making an effort to mirror the WCS pool, Ladder Season 5 will feature seven 1v1 maps in total.”

“We believe Polar Night LE will create some interesting choices for players when deciding how to best take advantage of Destructible Rock and Line of Sight Blocker positioning,” write the StarCraft dev team. “We think these map features will help make for some exciting games.

“Although the base and expansion layouts on Yeonsu LE are quite standard, we believe this map’s cool factor lies within the flow of its ground paths,” they go on. “The ways in which the various ramps by the natural and third bases interact feel unique, and seem to be a standout feature on this map.”

And Frost? “We were looking for a four player map to add this season that was not only solid overall, but different as well. We wanted to try Frost LE because of the variety in play styles it will provide depending on each player’s start location.” 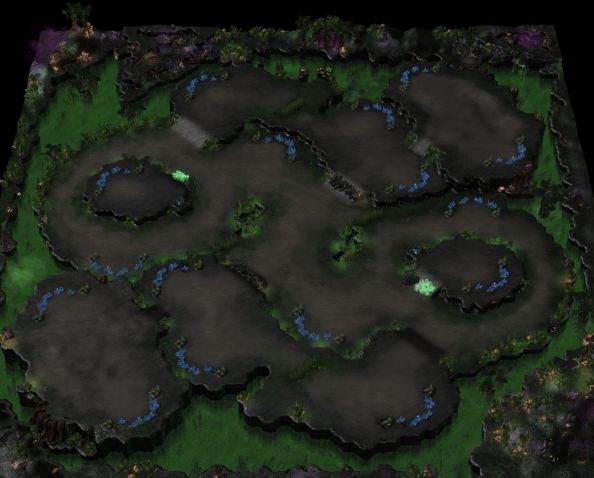 I count three new maps there, which leaves two for 2v2: Isle of Slaughter and Resupply Tanker. They’ll take the places of Molten Crater and Overwatch in the ladder pool.

Isle of Slaughter is a fortress map with a very long rush distance, which Blizzard reckon will prove “easy to macro on”.

“However, once the Destructible Rocks toward the center of the map are destroyed, the attack path between teams will become much shorter,” they expand. “The goal on Isle of Slaughter should be to macro up while keeping a close watch on when the combat starts, since reaction times will need to be much quicker during the mid to late game.”

Resupply Tanker, meanwhile, has an “easy to take fast expansion”.

“But allies can’t easily assist each other on this map, so be careful not to grab this expansion too soon,” warn Blizzard. “The two attack paths along the sides of the map are good for focusing attacks on one opponent, but taking some time to clear out the center Xel’Naga Watchtower area before initiating an attack will often be a much safer way to engage on this map.”

All of the above maps will now appear in competitive matchmaking queues, and are available to try out in the Custom Games list. And remember: the new ladder season means a free character name change. A brand new start, if you want it.

Are you playing Heart of the Swarm in a vaguely competitive manner? If so, what are the new arrivals worth to you?