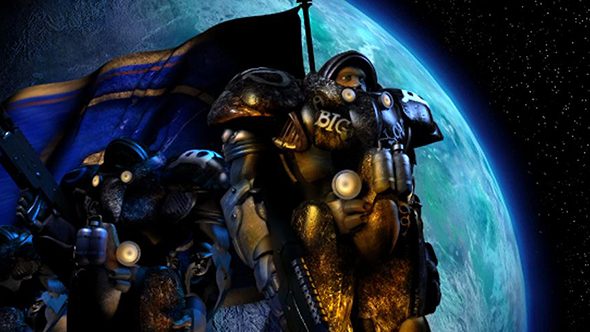 There are plenty of cancelled titles in Blizzard’s history, but Project Nomad is one we don’t often hear about. The squad-based sci-fi game was canned and the team behind it moved on to World of Warcraft – but it turns out WoW wasn’t the only game to swallow up Nomad’s developers.

As StarCraft development reached its most intense points, with developers lengthening their days and working into the weekends, the team started picking people off from other projects to assist in development. Former programmer Rob Hueber, for example, was hired to work on ‘Team 2,’ the group behind Nomad – until he was pulled to the StarCraft team.

Don’t focus on what might have been – enjoy what was with the best old games on PC.

“As tends to happen at Blizzard,” Hueber says, “whatever project gets ahead starts to pull people from the other team, and other teams die from attrition and things like that. That’s not a bad way to do things. It definitely hurts the project that gets resources stolen away from it, but it’s for a good cause, obviously.”

That comes via an excerpt from David L Craddock’s upcoming Blizzard history, Stay Awhile and Listen: Book 2, which is currently seeking funds on Kickstarter. Craddock helped bring Project Nomad to light years ago, telling Shacknews about internal struggles as the Blizzard team attempted to figure out exactly where to go with the game.

Several members of the team wanted to do something else entirely, so Kevin Beardslee and Bill Petras pitched a more accessible version of EverQuest. Nomad was scrapped and development on World of Warcraft began in a matter of days.

With Nomad apparently bleeding developers to projects like StarCraft, it’s little wonder that the game suffered as it did. In hindsight, it’s tough to imagine how it could’ve been a game to rival the massive successes of WoW and StarCraft, but you never know – maybe it could’ve been another Blizzard classic in the end.