Even before the last of Stephano’s units had been been wiped from the map in what turned out to be his final WCS EU match yesterday, the 20-year-old Zerg master had begun hanging up his hat. “Congratulations. You deserve it,” he typed to his opponent, LucifroN, and the thousands watching on live streams.

“Sorry for the fans. This game is not for me anymore. Goodbye.”

Ilyes ‘Stephano‘ Satouri first laid out his plans to retire six months ago. Since his rise to the top of the sport in 2011, he had allowing his talents to pull him around the world – to the pedestals at WCS EU, IPL and NASL. Now, with his star on the wane, he has decided to cut and run – investing his considerable winnings in his bigger dream: medical school.

After the match, Stephano was asked to summarise his career in an interview.

“I always acted like I didn’t care about the game, but I do thank Blizzard for making this game because it has changed my life, and I don’t know what would be my life without it,” he said. “Right now, probably most likely miserable.

“Luckily I was able to be good [at StarCraft] without making too much effort,” he smirked, to the general amusement of the crowd around him, before adding: “It’s true.”

“Thanks for all the fans who supported me during this two and a half years and still loved me in the bad days, which are the six past months. Thanks to my family for supporting me a lot, a lot, a lot, a lot.

“Let’s not cry; it has been a great experience but everything has an end. I didn’t end it how I wanted with a big win, it’s actually the worst way I couldn’t finish it.”

“I just couldn’t. It’s not for me anymore, as I said in the game. Thanks to EG for helping me do this. This is a goodbye.” 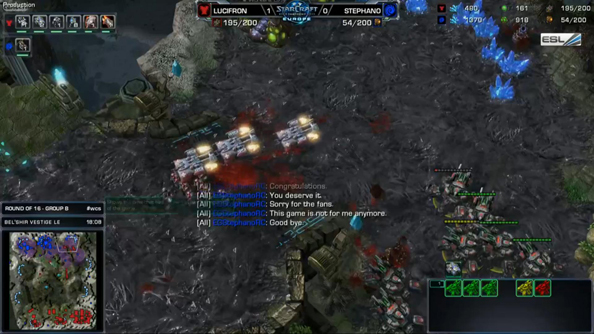 As the tributes poured in on Reddit, Evil Geniuses team captain Geoff “iNcontroL” Robinson added his own final word on Europe’s most popular pro player:

“It’s a sad day because we no longer get to see him play or watch his shenanigans at tourneys,” he wrote. “It’s a GREAT day because a young man played a video game for a living and made a fortune, traveled the world then left under his own volition to go to school and resume his ‘real’ life. THAT is a great story friends. One that many should wish to be so lucky!”

Stephano made over $240,000 in prize money during the course of his short career – more than twice the winnings of his nearest European competitor, Mousesports’ MaNa. The details of his sponsorship deals and salary from Evil Geniuses have not been made public.

If you’re wanting to celebrate a brief, brilliant career in eSports, you could do far worse than head to this thread on /r/starcraft, where fans are debating which game to remember as Stephano’s ‘Immortal’ – in Chess tradition, the crowning achievement of a retiring player.

Which of the French prodigy’s most famous matches will best stand the test of time, do you think?