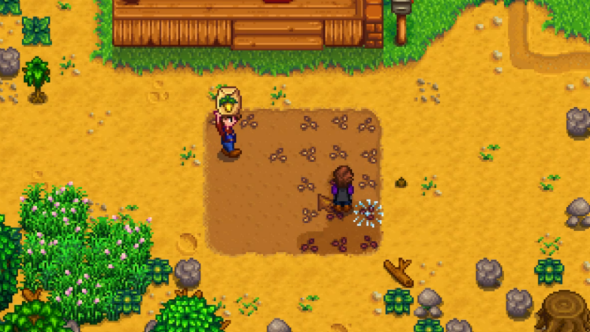 It can hard to share control of the things we love. Particularly if the thing we love is a well-oiled jam production machine, a great act of industrial agricultural that brings in tens of thousands a day. Or maybe that’s just us. At any rate, resist those selfish urges, because now you can expand your farming enterprises ever further with the addition of multiplayer to Stardew Valley.

Multiplayer has been a long-awaited feature, and as of this week it has officially entered open Beta testing. The new multiplayer system is quite simple: one player hosts a new co-op farm and invites up to three other people. These people are Farmhands, and they each get a little shack on the property to sleep in. You can then farm, fish, raise animals, make friends and scour the mines – just like real friends do.

You can pool your resources and work on the same project, or split up and take on different tasks in different locations. Money is shared between all players while inventory space and relationships with NPCs are specific to each player. If you’re worried about the game becoming too easy, during farm creation you can adjust the profit margins on all items to keep things challenging.

Playing Stardew Valley multiplayer is such a simple change, but it completely changes the dynamic of the game. While in the base game it’s easy to become overwhelmed and continually run out of time, in multiplayer you can distribute your workload. The speed at which you can get a large crop hoed, planted and watered while working together is exhilarating, even in the early stages of the game. 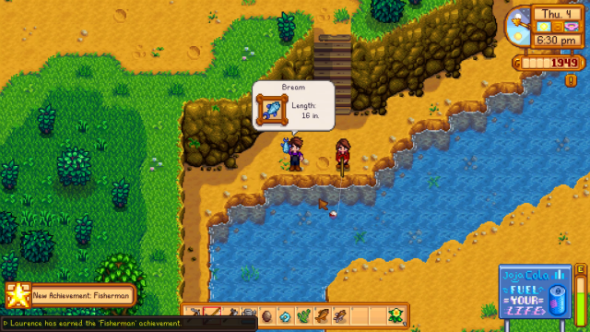 By the third day, we had already managed to plant a large crop, gathered up enough wood to repair the bridge on the beach, and clear out a huge section of overgrown land. Traversing the mines is also considerably faster, allowing tons of ore and stone to be gathered in a short time-frame. For some, playing the game this way might not offer enough challenge as, even with the profit margins shoved way down, gathering materials needed for crafting and building is just so much easier.

You can invite players to an existing farm by building cabins for them to sleep in, but building a new farm with another person is a great multiplayer experience, too. We encountered some lag, with infinite or long loading screens, crashes, characters jumping around, and delayed item drops from cutting down trees and the like. But this is forgivable considering the multiplayer mode is still in beta, and will hopefully be ironed out soon.

There’s more than just multiplayer stuff here, too: this big update also brings in a slew of new single-player features. A new Winter event, the Market Festival, additional character cutscenes and interactions, a mysterious new type of collectible, and horse hats. Hats for your horse. Put a hat on that horse. Just do it. The new multiplayer is the star of the show though, it opens up exciting possibilities and gives players a whole new reason to sink hundreds of hours into their rural farm away from home (or, indeed, expand your jam empire).