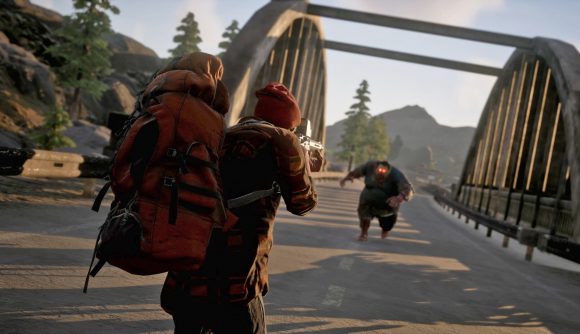 We’re three weeks away from a meaty chunk of State of Decay 2 DLC. Named Daybreak, the release casts you as a new character and tasks you with taking down waves of the undead with up to three friends.

You’ll play the role of a soldier in Red Talon, the private military company with its heavy footprint all over the main events of State of Decay 2. The goal is to protect a technician while he works on establishing an uplink to CLEO, an autonomous drone and satellite network, even as the waves get longer and the enemies tougher.

The new blood plague juggernaut in particular sounds like a right pain, dealing plenty of damage and infecting you with a disease that cannot be healed. Ferals, meanwhile, climb right over the walls you erect to defend the outpost.

Unlike some wave-based modes, however, there is an end – if you can survive for about 45 minutes and seven waves, repairing walls using a limited number of rebuild kits as you go, you’ll have the satisfaction of winning. What’s more, you can take the CLEO weapons and consumables earned here back into the main game.

The DLC will cost £9.99 when it launches on September 12th, with an extra 10% off for Xbox Game Pass holders.