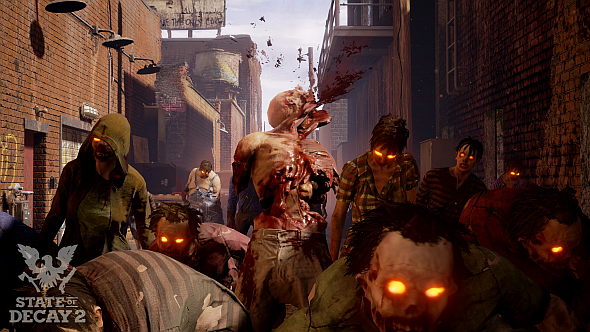 Zombie-themed survival shooter State of Decay 2 will launch with three maps, but you should be able to carry resources, survivors, equipment, and vehicles between them. You may even get a refund on anything you’ve invested in building bases on old maps, say developers Undead Labs.

Battle more endless hordes of the living dead in the best zombie games on PC.

The news comes via a blog post on the State of Decay website. Community manager Sanya Weathers says each of the three maps will be “roughly the size of the original. You should expect to see slightly different environments, definitely different landmarks and locations, different layouts lending themselves to different strategies, unique home sites and even different mission types.”

The intention, explains Weathers, is to create the sense that players are progressing from one small town to another, investing in the game world, and to avoid any feelings of deja vu that might arise from playing many missions on the same huge map.

“Oh, and one more detail – the multiple map setup makes it easy to expand the world down the line, if you know what I mean.” A clear hint at future DLC, there.

Weathers also assures us that “the intent is for us to be able to take all of our people, and everything in our supply lockers and rucks”, from one map to the next (I assume ‘ruck’ is short for rucksack.) “We’ll have all the vehicles parked in our home site parking spaces, along with whatever’s stored in the trunks. We’re also going to get at least a partial refund on what we sunk into building our facilities. That’s the intention, anyway.”

The original State of Decay essentially took DayZ’s concept and made it single-player, which enabled it to tell more of a story and to incorporate stealth, role-playing and even strategy mechanics (you can build and then reinforce a base). It was released on Xbox 360 in 2013, with a PC version going up on Steam early access a few months later. If you missed it, you can buy the year one survival edition here.

The sequel adds cooperative multiplayer, and is due for release some time this year.