Whenever SteamSpy’s founder Sergey Galyonkin shares insights from his creation, it is never less than interesting. At GDC this year he gave his latest report on the state of Steam, and it’s a fascinating mixed bag. The headlines: sales and prices are dropping, despite premium price points being the most lucrative, and despite last year having been Steam’s best so far – by certain measures.

In fairness 2017 was a pretty great year all-round for PC gaming. Here are our picks from last year.

Last year Steam grew by every significant metric: overall game sales, total revenue generated (up to $4.3bn from $3.5bn in 2016, not including DLC sales, microtransactions, or free-to-play games), and audience size. Indeed, Galyonkin says 63 million Steam users signed up in 2017, representing 22% of the platform’s total 291 million players, so it is still growing at an astonishing rate.

In possibly related news, prices are also dropping: the median price for a game now is just $5.99. That’s $3.99 for an indie, and $2.99 for an indie released in 2017. Galyonkin’s analysis: “the pricing situation is becoming more and more unhealthy, and reminds me of the pre-iOS 11 App Store. The race to zero is on.” 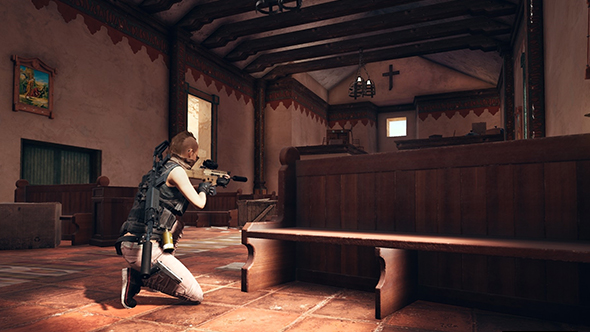 These new problems compound the familiar problem of surging game releases, and the attendant discoverability challenge. As of February this year there were 21,406 games on Steam, of which 7,696 (or 39%) were released in 2017 alone. In the indie sector, there were 2,149 indies on Steam in 2015, and 13,624 as of February 2018. So while Steam is growing, the audience simply can’t keep pace with the flood of new releases.

Speaking of bestsellers, these were the most lucrative games on Steam last year. 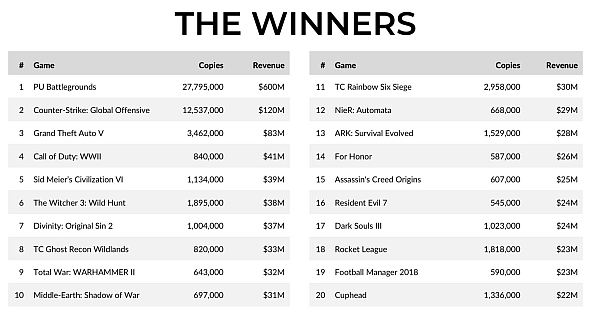 Not many surprises: PUBG, CS:GO, and GTA V make up the top three, with triple-A dominating the list. Indie exceptions include Divinity: Original Sin 2, Rocket League, Ark, and Cuphead.

Of those, none sit at the $9.99 price point, “a so-called sweet spot that a lot of indies love”, as Galyonkin says. If you take out PUBG (which costs $29.99 and sold enough by itself to skew the data), the most lucrative price points on Steam are actually $19.99 and $59.99, with those two prices accounting for 40% of all revenue. 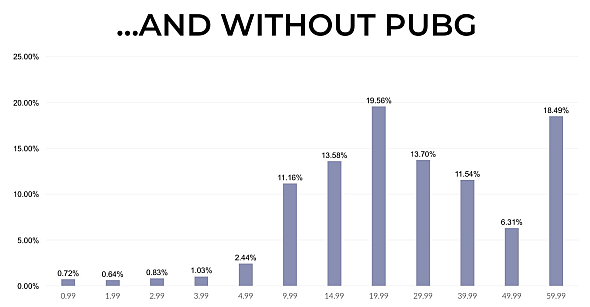 Galyonkin full report is on Medium here and is well worth a read.