There’s a big shake-up coming to how Steam’s bundle purchases work, giving them dynamic pricing. In official documentation given to developers and received by PCGN, Valve have outlined a redesign of Steam bundles so that they automatically give buyers that already own some of the products within a discount. This scales based on the number of products, and is already available on some bundles in the wild, though remains officially unannounced. This also has the knock-on effect of making sure that bundles are properly discounted when their components are on timed sales.

Alternatively, don’t worry about all this and just play the best free games there are.

Valve’s official explanation to developers goes like this, “With Steam Bundles, if a customer already [owns] some items in the Bundle, they will pay for and receive only the items not already in their account. This allows the best fans of your series or franchise to ‘complete the set’ and get a deal on the remaining items in the Bundle.”

The benefits of encouraging more people to buy for those that are selling should be obvious, but it’s pretty great for those of us on the customer side too, as Valve continue to explain, “Past Complete Packs were sometimes a bad deal for customers that already [owned] one or more of the products in the pack. Either it made bad economic sense for those customers to purchase the pack, or they just felt bad about doing so since it [looked] like they were paying for products they already [had]. The new Steam Bundles system addresses this.”

I’ve definitely seen and felt this phenomenon. Even if it’s only a couple of quid more to buy a complete pack containing some game I want, a dozen I don’t have and some I do, it feels like a waste over just buying the game I want. Now, not only is it possible that complete pack will be cheaper to begin with, but the feel bads are banished. Plus, because of the way the new bundles are coded into the system, big sales won’t result in odd pricing anomalies with bundles being more expensive than a group of singular purchases.

The new system is already in-use for the Headup Games Complete Bundle. We’ve grabbed some screenshots from three seperate accounts to show the differences. First, here’s the bundle for an account that doesn’t own any of the games: 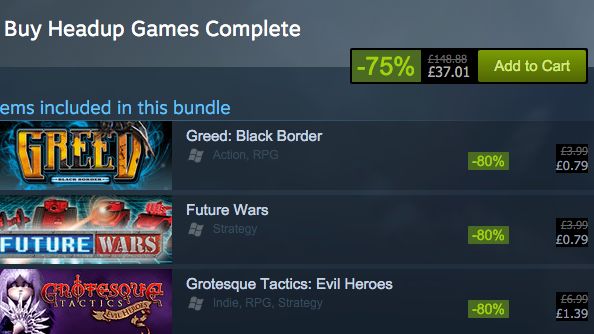 Here it is on my account, where I own just one of the titles, Trapped Dead: Lockdown: 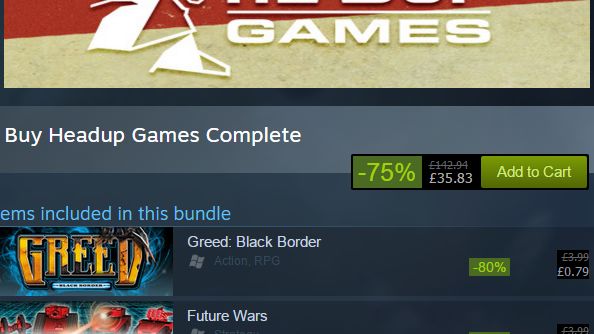 And here’s an account with a bunch of them already purchased: 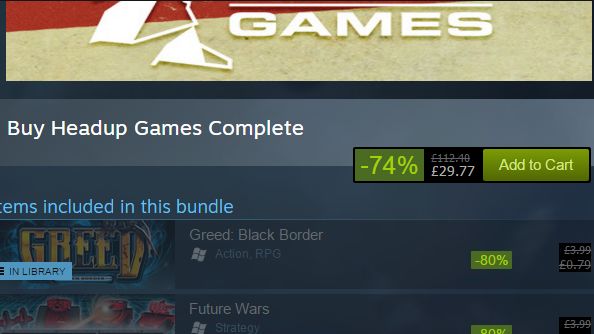 The percentage discrepancy is likely caused by rounding somewhere along the way, or simply a bug. Either way, the system clearly works. If it sounds familiar, Blizzard implemented something similar for its Hero and Skin packs in Heroes of the Stormabout six months back. Of course, old-style bundles, which Valve dubs Must Purchase Together, still exist, allowing for deluxe editions and with-soundtrack purchases of base games.

It’s not clear when this system will become usable en masse, but we’d assume before the next big summer sale at the absolute latest. Given developers have already been told about it, chances are it’s due for full implementation very soon. We’ve contacted Valve for further comment and will update if they get back to us.