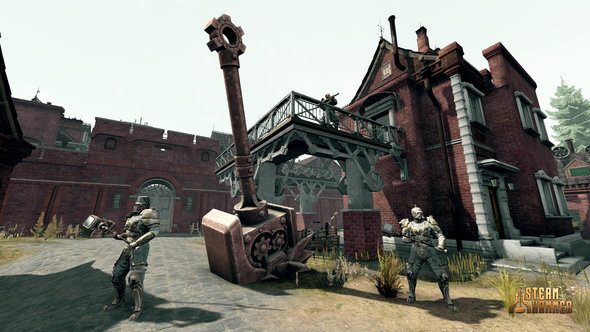 Big Way Games announced today that their upcoming title, Steam Hammer, will be hitting early access on May 12. Described as “open class system meets jetpacks and airships in a massive sandbox world”, Steam Hammer is set to bring the sandbox survival genre into the realms of Victorian steampunk, following a successful Kickstarter campaign and a subsequent two years of development.

Scratch your sandbox itch with this list of the best sandbox titles on PC.

The game itself sports an open class system, meaning that the player distributes their stats openly among a variety of skills including engineer, scientist, farmer, gunsmith, stormtrooper, sharpshooter and many more. These abilities are then used to engage with the world, crafting weapons, building houses and factories and piloting airships in epic battles across the land and sky. Furthermore, an extensive terraforming system allows players to construct mines, tunnels, ditches, mounds or simply move earth if they want to create space.

Steam Hammer Beta Access is currently available at more than a 50% discount for $11.99/£9.99/€11.99 until it’s released on Early Access. You can learn more over at the official Steam store page.