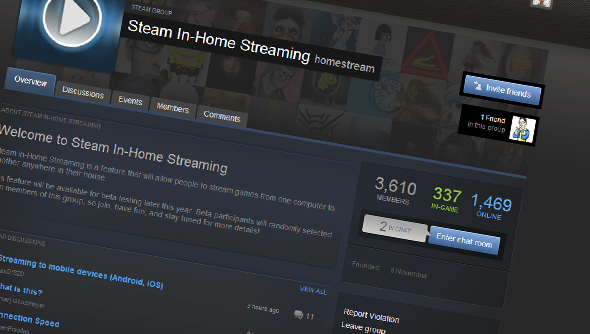 Steam In-Home Streaming will be a key part of Valve’s Steam Boxes. Machines running SteamOS are only capable of running Linux games natively, all Windows games will have to be streamed from a nearby gaming PC.

Valve want to make sure In-Home Streaming is up to scratch when they launch their OS and Steam Boxes next year. To that end they’ve set up a Steam group that will be inviting members to participate in the beta.

As with Valve’s recent Steam Trading Card beta and Family Sharing beta, stating your interest in joining the beta is as simple as joining the Steam group.

Valve keep their introduction to group brief: “Steam In-Home Streaming is a feature that will allow people to stream games from one computer to another anywhere in their house. This feature will be available for beta testing later this year.”

The group will also be where Valve developers are most vocal about the future of the system. It’s a discussion forum for suggested features, current problems, and hypothetical setups. For instance, one thread’s already asking how Family Sharing will work with In-Home Streaming, will you be able to stream games that you’ve installed from your friends library. Valve haven’t responded to the question yet but hopefully it will be a resounding yes.

So, if you want to take part in the beta you best join this group. What are you waiting for? Join it.

Joined? Good, have a video: