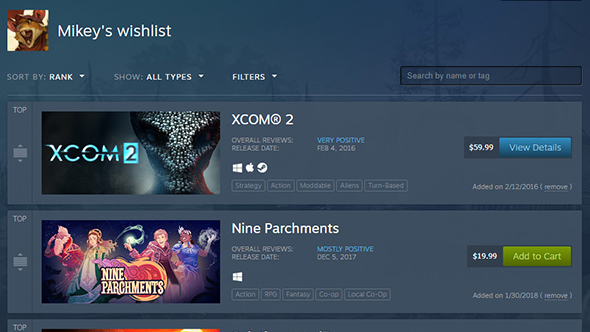 Update, February 15: The latest major Steam sale is live, along with some major changes to the wishlist page.

As suspected, the Steam Lunar New Year Sale began today, offering discounts across a big selection from PC gaming’s biggest digital store. What we didn’t expect was a significant redesign of the wishlist page, but we got that, too.

The new wishlist page has each game taking up a bit more space, detailing user tags, review response, release date, and platforms. You can now add a game to your cart directly from the wishlist, though you still have to go to the store page if the game offers multiple purchase options like standard and deluxe editions.

Most significant, you now have an array of new sorting and filter options. You can filter games down to specific discount levels, exclude Early Access or pre-release games, or even filter down to titles that are currently less than your Steam wallet balance. You can also use the newly visible tags to filter your wished for games that way.

This is a significant change, so naturally some users are unhappy about it. Notably, your wishlist’s rankings no longer have numbers attached, though you can still manually sort the list. Some people also don’t like how massive the new cards are. These people seem to be far more invested in the specifics of the wishlist page than I ever was, but we’ll see how the changes end up shaking out.

We all love a Steam sale, even if our wallets don’t. Luckily it may not long until the next one, if leakers Steam Database are to be believed.

Steam’s Lunar New Year sale is due to start today and run until February 19.

Valve have not yet confirmed the Lunar New Year sale, its timings or what titles will be on offer.

Original story, January 23:The next Steam Sale begins on February 15.

The dates of the next Steam sale have reportedly been leaked. The Lunar New Year Sale will run from February 15 to February 19.

The report comes from Twitter account Steam Database, which claims the information was leaked less than five hours after it was made available. Reportedly, that’s thanks to Steam Direct, which recently replaced Steam Greenlight, making it easier for anyone to get a game onto the platform.

The next @steam_games sale is Lunar New Year Sale and will run from February 15th to 19th.

Thanks to Steam Direct, it now takes less than 5 hours for that information to leak.

A second report comes from a post on the Steam subreddit. The post is apparently a screenshot of an email from Steam to its “partners,” confirming the February 15 start date. The email reads “we are excited to announce an upcoming Steam Sale event to celebrate the Lunar New Year holiday,” and that “the Steam Lunar New Year Sale will run from February 15th to 19th.”

Steam’s largest sales are run in the summer and over the Christmas period, but Valve also run smaller seasonal sales throughout the year. 2018 is likely to be no different, with the Lunar New Year Sale potentially intended to appeal to a Chinese audience that has grown significantly with the rise of PlayerUnknown’s Battlegrounds.

Currently, the dates are still just a rumour, but they do align with Chinese New Year, which is celebrated on February 16 this year.