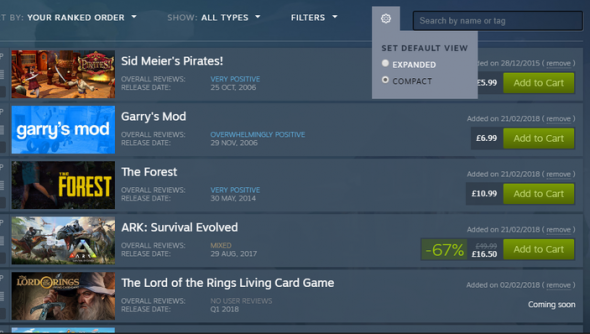 Valve have made improvements to the Steam Wishlist. The update adds more filtering and sorting options, such as a compact mode, and shows more relevant information such as review score and Early Access state of games.

Want to know more about Steam? Check out our Steam FAQ.

Valve announced the update on the Steam blog, explaining the changes had been made with users’ feedback in mind.

“When we started planning out the set of improvements to players’ Wishlists, we began with the frequent requests we see from the community,” the Steam Team write. “We’ve heard that players wanted to see a few key pieces of information on their wishlist and more ways to sort and filter.”

Steam users are happy to see a compact mode has been added to Wishlist, allowing you to quickly scan through long wishlists while seeing only the most vital information.

Wishlist games can now be filtered based on discounts, such as 50% off or 75% off, as well as tiers of price. This is to make it easier to find discounted items during a big Steam sale. However, if you would rather not see wishlist items you cannot afford, there’s also the option to filter to see only items you can buy with your current Steam wallet balance.

Wishlist games can also be filtered by tags or genres, displaying the top-ranked tags for each game on your wishlist. By clicking on a tag, you can filter your wishlist to titles of the same tag.

There is now also the ability to filter games by their Early Access state, filtering out games which have not yet had full release. Similarly unreleased games can also be hidden when searching for games to play now.

A multitude of filters can be applied at once and will automatically save and apply for when you visit your wishlist in the future. 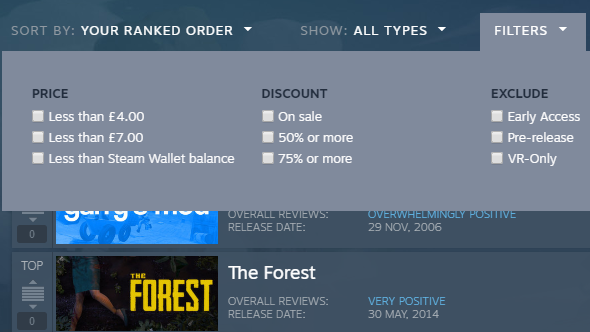 Another quality-of-life addition is the ability to directly add items to your cart from your wishlist. While this might seem like an easy addition, Valve explain it was a much more complex feature to add than it appears.

“We found that there are cases where it isn’t always clear which version of the game should be added to the cart. For example, some games have a Deluxe Edition or multiple Starter Pack options that make the offer more complicated,” Valve say. “Some games even add or change the offers available over time, so we wouldn’t want to make assumptions about which version you are ultimately interested in when you hit ‘add to cart’. With that in mind, games with a single purchase option can now be added directly to your cart, but for games with alternative purchase options, you can click through to the store page to find the right option for you.”