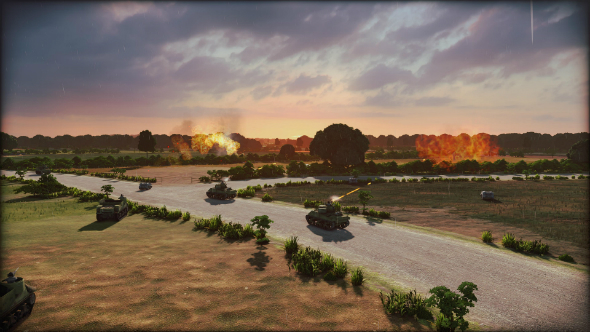 Update May 23, 2017: Steel Division: Normandy 44 has finally rolled out on PC, allowing us all to micromanage vast conflict across WW2.

In the game, you’ll take control of battle groups of infantry and vehicles, using them to outmanoeuvre, overpower, and out-think your foes, as you can see in the fancy new launch trailer above.

War. What is it good for? Making up our list of the best war games, for one thing.

The game will let you take control of six different countries and their legendary combat divisions, from the American 101st Airborne to the German Armoured 21st Panzer division.

From this selection, there are over 400 distinct units to lead into battle and tactically deploy against your enemies. Every unit in the game is historically accurate.

Original Story May 4, 2017: Paradox Interactive and Eugen Systems have announced the release date for Steel Division: Normandy 44, an RTS so focused on the details that the even the map is created from aerial scans of Normandy. Steel Division will rumble through the fields on May 23, so it’s just over a month until you can command your authentically-recreated forces.

If you like the look of the new trailer above, you can even pre-order the game from today, for $39.99. If you decide to commit now, you get access to some exclusive in-game content, as well as immediate access to the beta. The beta will roll from now until launch, so you’ll be ready to crush your enemies once the game releases.

There’s also a Deluxe Edition if you’re feeling flush. That’ll set you back $59.99 and will include the following: