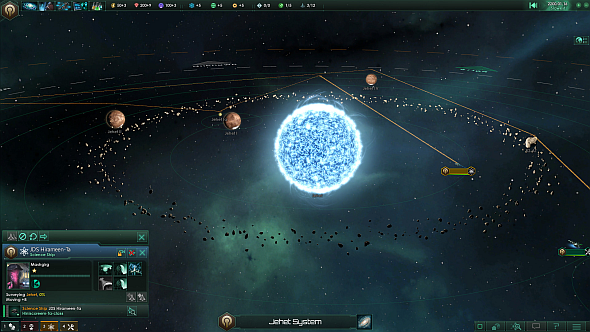 At Paradox Con this past weekend, we chatted with Stellaris game director Martin Anward about his plans for the future of his epic sci-fi strategy game, which just had its first birthday. On his list: new features and a few tweaks in warfare and diplomacy, but probably not a “super-deep economic system”.

Stellaris keeps getting better, and it was already on our list of the best strategy games on PC.

Anward names war and diplomacy as the two big systems he wants to improve and expand, in no particular order. “We have a lot of interesting ideas for both areas, like Doomsday weapons – which is a challenge in itself – and deeper federations. We have to have a galactic community, where you can join or leave the galactic UN, depending on how things work out.”

Besides adding features, Anward says “there are some things that we’re not entirely happy with” that he would like to tweak, “like how wars play out.”

Asked if he sees any clear limits on the ways in which the game could expand, any features or systems that are “not Stellaris”, Anward replies: “Absolutely. You know, there are people asking if [they can have] a super deep economic system like Victoria, but that’s not Stellaris – that’s Victoria. A little more depth? Sure, in an interesting way. I’d like a little more mechanics. We could have a proper trade system. But, no. That level of depth is wrong.”

Sorry, prospective trade federations. Fresh from its free Banks update and its paid expansion, Utopia, Stellaris is on Steam here.