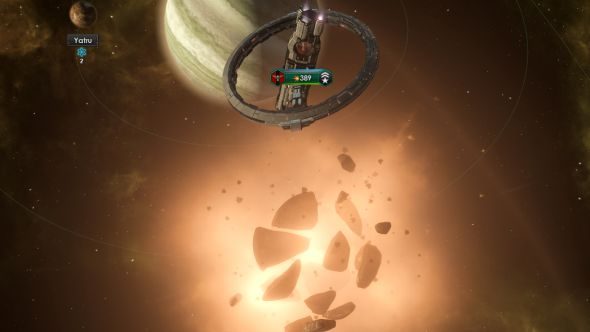 Update, January 25: Stellaris: Apocalypse will bring its planet-destroying new features to a galaxy near you on February 22.

If the stakes of ruling the galaxy aren’t enough for you, the Apocalypse expansion for Stellaris will be adding big guns and “galaxy-altering weaponry.” Judging by the story trailer above, it seems that we’ll be seeing some Death Star-level destruction by the time all is said and done.

For some strategy you can engage in right now, here’s the best of the genre.

In addition to the new teaser, Paradox have announced release details. Stellaris: Apocalypse launches February 22 for $19.99 – that should translate to £14.99 / €19.99 if you’re not spending US currency.

Original story, January 11: Ever wanted to kill a planet? Stellaris has the weapon for you: planet killers. Paradox call them like they see them. These nasty weapons, along with a batch of other changes and additions, will be a central part of the Apolcaypse expansion that’s due to land soon, but with no firm release date yet.

Paradox are also adding Titan capital ships that provide support and humongous guns to your fleets, along with defensive structures of similar power for keeping your own planets safe. Marauders are also being added, which are new new pirate factions that can be bribed to attack enemies as mercenaries – they also unify for a new endgame crisis. Finally, a batch of new Ascension Perks and Civics are on the way.

A bunch of details can be found in this dev diary, or doubtless part of the livestream that’s due to kick off any minute now:

The time to release from announcement is usually extremely short for these Paradox expansions, so expect to hear more about it soon. There will also be an attached patch, as explained in the dev diary, that will bring some features for free.