There are many 4X games on my hard drive, but only one that allows me to lead a race of aristocratic, psychic plant monsters on a crusade across the galaxy with my pet space dragon at the head of a grand armada. Stellaris, which turns three years old today, is unique in more ways than I can list.

It marries Paradox Development Studio’s signature grand strategy shenanigans and real-time-with-pause combat to classic space-based 4X trappings – those that have been drifting through the black since the Master of Orion days. All of that is then sprinkled with enough sci-fi tropes to get you hunting down dog-eared copies of Iain Banks’ and Isaac Asimov’s finest works between campaigns.

The other big feather in its cap, however, is that Stellaris was the first major, original game series launched by the studio since 2004’s Crusader Kings – if you don’t count one-offs like Sengoku and March of the Eagles. And it was the first of the studio’s library to deal not with humanity’s past – as all its historical titles do – but with the potential future of humanity. Hence Stellaris was left to find its own way out among the stars, much more so than, say, Hearts of Iron 4, or even the newly-minted Imperator: Rome. And there was a fair bit of stumbling around in hyperspace to get the experience to where it is today.

Awesome future tech is a huge draw of most science fiction, and its implementation in Stellaris as we know it, as game director Daniel Moregård tells me, was far from set in carbonite until fairly late in development. As it stands, technologies are selected from three or four semi-randomised cards each time you have a scientist free up, with certain cards requiring other cards to have been researched before they get shuffled into the deck. There are also cards that are more likely to show up based on, say, whether your empire is more into massive lasers or planetary engineering. 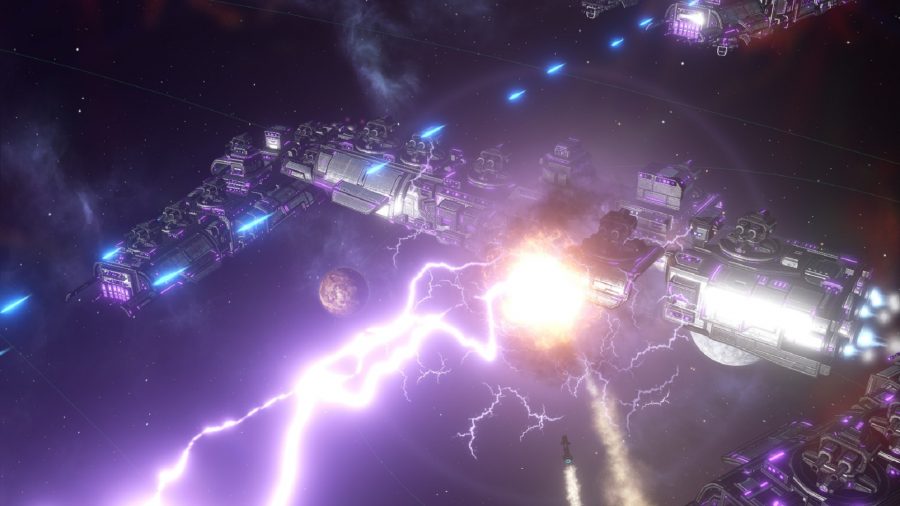 There was a time, though, when the team was working with something more like the familiar, branching tech tree you’d see in a game like Civilization. “It was pretty terrible,” Moregård admits. “Some branches would be easy to understand and some would be absolutely horrendous to look at.” Later, they tried out a different tech screen involving large hexagons representing broad categories of technology – like robotics or industry – with smaller hexes representing individual techs within it. They would connect to each other and even sometimes to techs in other categories, with their placement being semi-randomised as a way to give each campaign a sense of its own challenge.

“It looked really cool,” Moregård says, “but it was way too complicated to make the content, the stuff you actually put in the tech screen, fun or make sense.”

Even once a tech system had been decided upon, there were still significant shake-ups around the time that the code had moved into the alpha stage. “We finally [had Stellaris feature complete], and immediately after that, we decided to take out a whole gameplay system and implement the tile system that was later released,” one of Paradox’s associate producers Aziz Faghihinejad tells me. 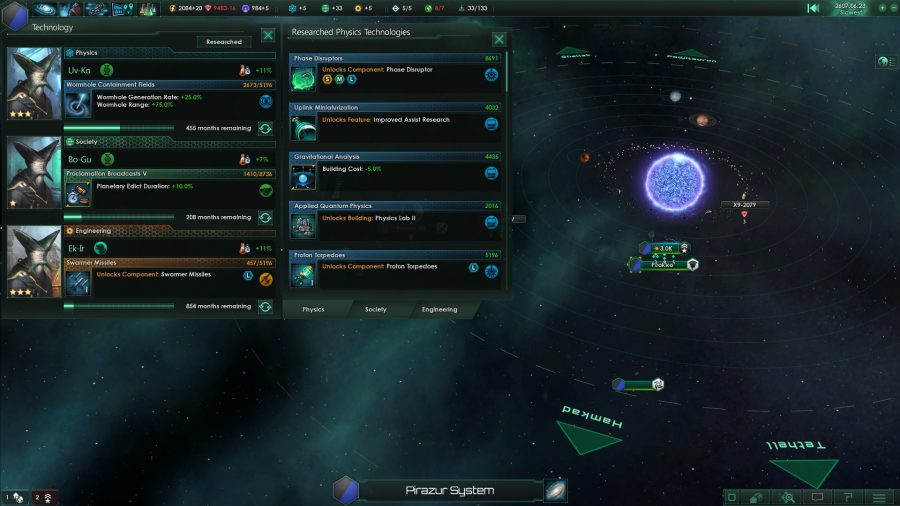 This willingness to scrap something and start over if it’s not working clearly hasn’t faded. That planetary tile system Faghihinejad mentions was itself completely gutted in 2018’s 2.2 patch in favour of a totally new planet interface with districts, jobs, and much more room for specialisation. Perhaps more than any other Paradox game, you can spend a year away from Stellaris and come back to something that feels more like a sequel than a game that’s been updated or given an expansion.

Previous Stellaris director Martin Anward left his position on the grand strategy space game to lead another "secret project" over at Paradox. This was back in 2018. Unfortunately, news on what that project hasn't arrived yet, but many fans suspect it'll be Victoria 3. We shall have to wait and see.

The dev team’s general trajectory has changed more than once over the course of its lifetime, too. The original release and some of the earliest post-launch content was overseen by Henrik Fåhraeus of Crusader Kings II fame, before passing the torch to Martin Anward, previously helmsman of Europa Universalis IV, and finally to Moregård, who came from a UI/UX background and had been working on Stellaris since the early days.

“I think the biggest difference would be between Henrik, and then me and Martin,” Moregård says. “Because me and Martin I think are maybe a little bit more similar in what we like… I think I have the biggest UI focus of us all. You’re probably going to see a lot more cooler UI [going forward].” 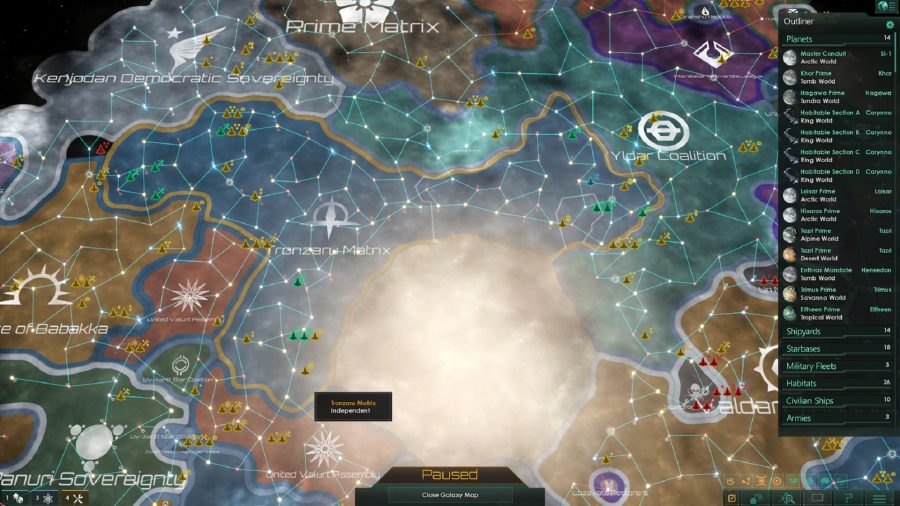 As to the Fåhraeus era, Moregård describes the original director’s vision as having been “more wild,” with a greater focus on characters as well as leaning into the “feeling, immersion, flavour, and essence” of the setting. Anward and himself, on the other hand, he views as more interested in designing interesting systems that tell their own stories through simulation and AI behaviour.

Aside from planet management, other huge aspects like warfare, empire creation, and exploration have been totally reworked since launch. There are very few areas of the experience that haven’t been iterated on in some significant way. And it hasn’t always gone smoothly, as might be expected for a game of this complexity. At one point, when fixing the code for multi-empire Federations, a change in formatting for some reason caused every ship and space station in a former Federation president’s empire to explode when a new president got elected. Another significant bug that had flown under the radar was discovered by a fan after seeing a picture of a room in the Paradox offices that had been decorated with actual bits of code from the game.

The team isn’t afraid to continue iterating through any rough patches, though. Moregård still isn’t entirely happy with the economy system, even after it was completely rebuilt in the most recent major patch. Beyond that, he feels diplomacy still needs some love, and would be keen to spruce up Federations, trade, and internal factions, as well as add new features such as a ‘Galactic UN’ of some sort, espionage, religions, and cults. More unique civics that open up new mechanics instead of simply providing numerical bonuses are also on the dev team wishlist. “[We want to make] empires more distinct, feel more personalised, stuff like that,” Faghihinejad says. “We can do so much more, I think.” 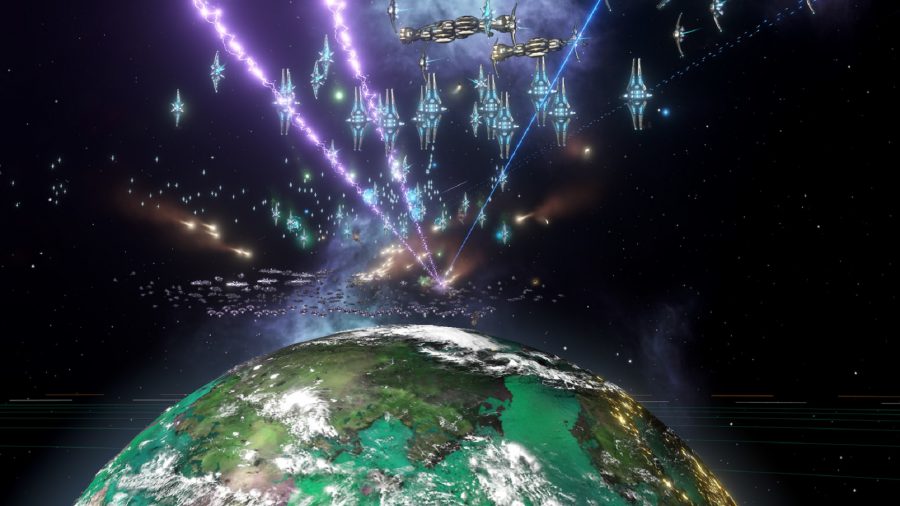 Coming up even sooner in the pipeline is an entirely new archaeology system that will allow explorers to search remote planets for artefacts and new, exciting story events. The hope is that this will keep the discovery pillar of Stellaris vital and interesting beyond the point where you’ve surveyed every star in the galaxy and set up burger stands on most of them.

Moregård doesn’t hesitate to ponder what he’d hope to find several more hyperspace jumps ahead, though, and that vision extends beyond the game that’s available to play today. He tells me he’d love to see Stellaris make you feel “like a smaller part of a larger galaxy,” and adds that taking inspiration from the board game Small World so that empires could decline and rise up would be a fascinating direction for the game’s future. “So you have an endless sort of period that continues,” he says. “What if you could make putting your empire into decline a fun mechanic? And then start a new one, with a young species emerging in the galaxy… that’s the sort of emotion that I love.”

Is that you, Commander? Try the best strategy games on PC

“I think we have a good plan moving forward in terms of what we want to do,” Faghihinejad adds. “We have a lot of cool things planned. But, for me personally, it’s going to be super exciting to start thinking about high level [stuff]. Like, oh, what happens when you make Stellaris 2? How is that going to be different? I think everyone is just thinking about that. What does Stellaris as a brand, as an overarching thing… what emotions is it trying to capture? What playstyles is it going to invent or facilitate?”

A sequel may be a long way off, but you can read more about what’s right around the corner for the current iteration of Stellaris in the recent dev diaries for Archaeology and changes to Precursor Empires. For now, let’s wish a happy third birthday to our favourite outlandish, sometimes disturbing space opera.