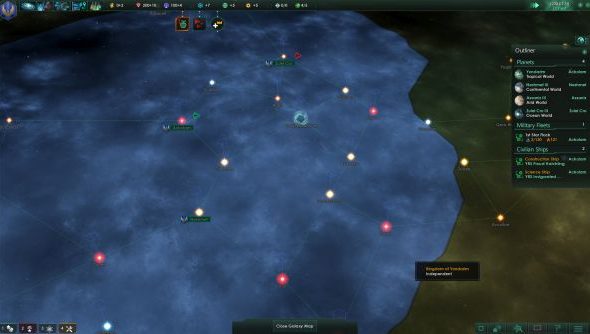 The Stellaris dev diaries march ever onwards, but this week’s is a little special. It deals with multiplayer, long the dream and awkward reality of 4X games, and how they’re solving some of the challenges so often faced by the genre trying to get more people involved. It also gives some base facts and figures, like how up to 32 people should be able to take part in one game.

Keep yourself going with the best strategy games.

What isn’t spoken about is if there is some sort of fast-game setting that will allow for matches to occur in a reasonable time-frame such as an evening or across a couple of play sessions at a weekend. Being able to support weeks-long games through save file hosting is all well and good, but scaling down is something 4X games have so far failed to do quite as successfully.

Read more over on the official forums, as well as catching a glimpse at some of the multiplayer UI elements. Worth checking the full dev diary archive too, if you’re interested in the game but might have missed one of the weekly updates. There’s no official release date for Stellaris yet, but it’s noted as “near-complete” in its listing for the PCG Weekender, and will be ready some time this year.