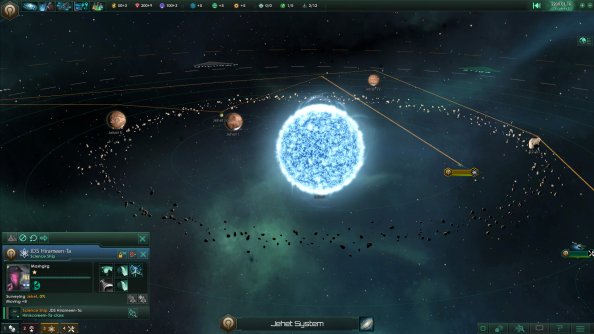 When our Fraser reviewed Stellaris, he said it was a great strategy game likely to be made better by Paradox’s prolific DLC habit. Here’s the very beginning of that process: a hotfix released this morning that addresses some of Stellaris’ technical shortcomings in combat and resource-gathering.

Into your space games? Venture into the void with our picks from the genre’s best.

The update tackles some bugs that have been difficult to ignore for those who’ve encountered them: a crash to desktop caused by ‘invalid’ armies in ground combat; a ‘help’ shortcut button that covered up the command to hold fleets; performance problems caused by too many resource stations. What’s more, some players were struggling to carry out orbital bombardments involving swarm invaders.

There’s also a neat ‘outliner’ menu at the side of the screen that helps you hop about space to where the drama is – but disabling some of its overlays was having the side effect of disabling it entirely.

All of that’s been fixed. And on the customisation front, the ship designer tool now sorts vessels according to size and allows transport ships to be edited.