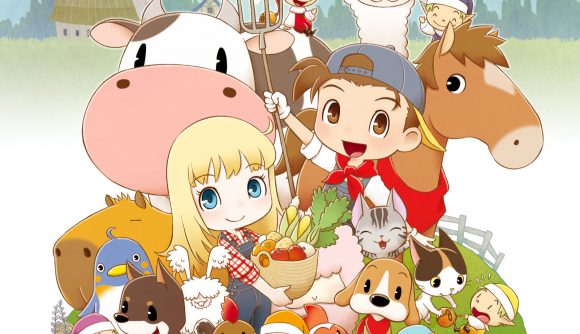 At this point, Stardew Valley has probably outdone every farming RPG that has come before, but my nostalgia for classic Harvest Moon runs deep. Luckily, the upcoming remake Story of Seasons: Friends of Mineral Town – previously announced only for Nintendo Switch – is coming to PC via Steam day-and-date with its console counterpart.

Story of Seasons: Friends of Mineral Town comes to Steam on July 14. This is a full remake of the original Game Boy Advance title, and introduces new features like additional playable characters, new crops, improved item management, and same sex marriage. The PC version will include support for resolutions up to 4K as well as mouse and keyboard controls, as you’d expect.

The GBA title Harvest Moon: Friends of Mineral Town is, for my money, the finest farming RPG there was up until Stardew Valley – and if you’re new to the classic series, it has a pretty confusing lineage. Properly known in Japan as Bokujo Monogatari, the series was initially brought West by Natsume under the title Harvest Moon. In a messy rights split-up, Natsume now publishes unrelated farming games under the Harvest Moon name, while the original Bokujo Monogatari games are now known as Story of Seasons in English-speaking regions.

This is the first proper Story of Seasons title to come to PC – Doraemon Story of Seasons is slightly different as a licensed spin-off – and should provide an ideal entry point for those of you who’ve entered the genre through Stardew.

For more farming games, from the simple life of Story of Seasons and Stardew Valley to the modern agriculture of Farming Simulator, you can follow that link.