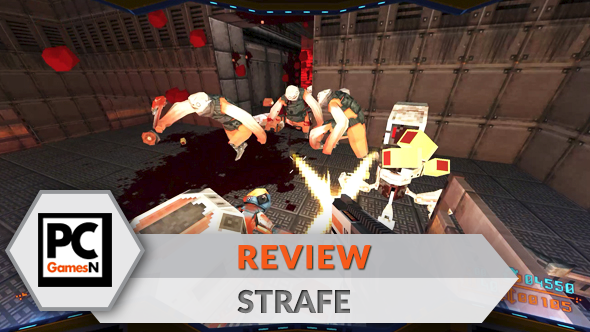 Strafe has taken the virtual lives of 29,744 players globally at time of writing. It’s not hard to see why. I’ve finished every Dark Souls game and tamed several Call Of Dutys on Veteran difficulty, but this pixel-loving nod to mid-’90s shooters really has my number. The game’s online stats paint the picture of an FPS that effortlessly owns those who dare challenge it; a savage throwback that cares not for regenerating health nor slow-mo superpowers. Yet there’s more to Strafe than its unflinching difficulty. This is an addictive blaster… albeit one that feels more than a little unfair.

So yes, your keester is going to be squarely whooped every step of the way in this retro roguelike shooter. First though, let’s address the large Dumbo-shaped critter in the room: Strafe quite deliberately looks like it was developed on a pocket calculator. Own a decent GPU? You’ll struggle to find another FPS in 2017 that pushes your graphics card less. Still, the old school stylings are undeniably charming, and the simple pixel art fondly recalls a time when the original Doom was the biggest game on the planet.

Developers Pixel Titans are very much in on the nostalgic gag. Cute nods to the ‘90s are everywhere you look. A scratchy, knowingly low-rent FMV tutorial; end-mission hub areas that whirr into life with the ringing bleeps of an old 56k dial-up modem trying to phone the internet; fallen space marines who could easily pass for Quake’s Ranger; and in a super cute touch, Nintendo 64 cartridges that occasionally appear when you shoot crates. Hey, this is the self-proclaimed “best game of 1996”, after all. 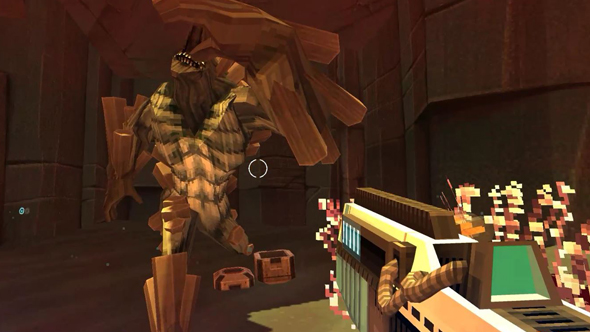 It’s a good thing Strafe sports such disarmingly simple looks, because you’re going to need every last frame your rig can pump out to survive its endless onslaughts of blocky monstrosities. You can forget using a pad, too. Controller support may be included, but this blisteringly brutal shooter demands the sort of precision only a keyboard and mouse setup can provide, and this comes from someone who prefers using a pad (heresy, I know).

Strafe’s combat centres around three weapons. Every time you start a new campaign the game gives you the choice between a chunky shotgun, ferocious machine gun or a supremely precise railgun. As you progress through levels, dinky robot vendors dish out free upgrades – the railgun’s projectiles eventually bounce off walls, for example – while an assortment of pistols, SMGs and rocket launchers can also be scavenged from corpses. There’s never much ammo for these, mind, so your default weapon ends up doing most of the homicidal heavy lifting.

Regardless of what firearm you choose (hint: go with the railgun) Strafe’s combat is highly fluid, punchy, and capable of shredding your nerves. Such is the speed and sheer number of onscreen enemies that standing still, even for a second, is a death sentence. The hordes of mentally unstable aliens and scittery attack drones can swarm you with alarming ease, and scurrying backwards while pulling off chains of headshots is an essential skill if you want to keep your delicate health bar topped up. 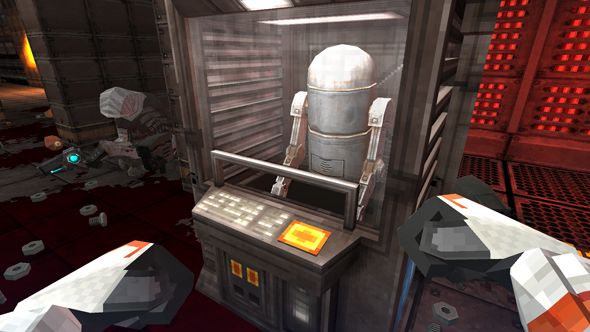 Part of Strafe’s unforgiving nature also comes from its structure. While its four unique zones aren’t totally procedurally generated, each of the 12 campaign levels do mix up the order and arrangement of their rooms to constantly keep you on your toes. It’s a decision that means your surroundings feel forever foreign, and this persistent disorientation ensures the already frenetic firefights are often unbearably tense.

Each level may only last between three and six minutes, but you’re going to come across (read: horribly murder) a whole host of mutant nasties as you dash towards these bite-sized missions’ end zones. Escaped mental patients stagger around the labyrinthine corridors of the Icarus spaceship, while later areas, like the alien deserts of Black Canyon, throw up hideous extraterrestrial insects and rock beasties that are clearly suffering from major Thing envy.

Whether shotgunning space loons or putting down intergalactic bugs, one trait unites all of Strafe’s foes: every last one of them explode like intestine-stuffed piñatas. Flying heads, arms, legs and other squishy extremities greet almost every shot, and the constant visual pay off that comes from splattering walls with 8-bit viscera is a gleefully gory treat. 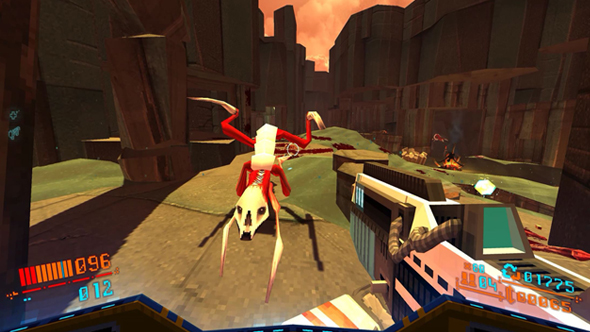 All this lo-fi butchery also has a more practical purpose: the rooms filled with pixelated guts act as clear visual markers for areas you’ve already explored. With the layouts of levels dynamically changing every time you fire up the campaign, these carcass-filled hallways present a bloody breadcrumb trail to help retrace your route. It’s a smart design decision, and one that organically rewards your blocky bloodlust.

Lopping off retro limbs is a delight, then, but there’s no shying away from Strafe’s savagery. The main barrier to succeeding in the campaign lies in how little margin for error you’re afforded. Strafe grants you but one life to try and get through a dozen levels – there are no restarts here, rookie. Die six missions in, and it’s right back to the beginning of the first zone. Think that’s unforgiving? Pah! The arsenic-laced cherry atop this murderous meringue is the stingy health system. Brace yourself… HP doesn’t regenerate. Hell, there aren’t really even health packs. The only consistent way to claw back slivers of health is by eating snack bars from sparsely placed vending machines, which are roughly as rare as talking snow leopards. 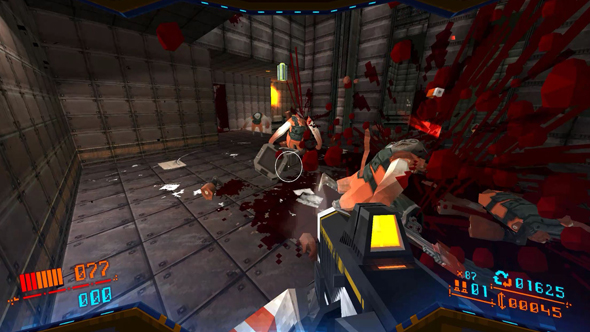 There’s nothing wrong with presenting a stern challenge, of course. Series like Dark Souls have captured hearts by being meticulously merciless, making those rare moments when you do succeed all the sweeter. Strafe isn’t just hard, though: it feels callously unfair. Adapting to changing environments is one thing. Getting constantly blindsided from behind as aliens in straightjackets quietly wallop your health bar? Yeah, that’s grade A B.S.

Enemies all too often magically appear, sneak attacking your HP into oblivion in cheap assaults that can decimate a 20-minute campaign run in a matter of seconds. No matter how much of a crack shot you become with that railgun, Strafe always finds ways to blindside you in a manner that constantly feels cheap. Even if you’re diligent and carefully watch corners, there’s a good chance a clutch of baddies will suddenly materialise from a secret room and catch you completely off guard. It’s underhanded, exasperating, and after a while, enough to completely sour the experience. There was even a time Strafe killed me with an exploding cabinet. Yup, this is a game that can murder you with office furniture. Urge to swear… rising.

The sad reality is Strafe exasperates as much as it exhilarates. For every fleet footed show of sharp shooting it conspires to blast itself in the food with devious tactics and a steady slew of quite ‘fuuuuu!’ moments to players brave enough to endure the onslaught. There’s a really solid, often graceful FPS in here, one beefed up with generous side content – the 10 room horde mode-esque Murderzone and online speedruns break up the crushing campaign. Yet ultimately, you can’t quite outflank Strafe’s unfair, overwhelming slaughter.