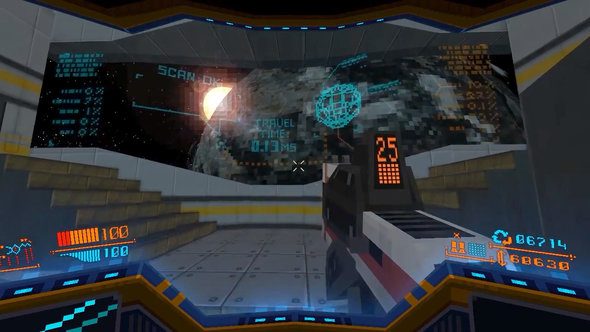 Billed as the world’s last worldwide digital convention, Strafecon will take place between May 4-8 and include a whole host of popular streamers playing what can only be described as the most self-aware game the PC has ever seen. Fans who tune in to the official Strafe channel during this time will be able to win a plethora of goodies, including digital copies of the game, limited edition box sets and extra-special vinyl sets.

Keep that nostalgia flame burning with our list of the best classic PC games.

Claiming to have a release scheduled for 1996 and boasting ‘bleeding-edge graphics and gameplay’, Strafe caused quite a stir back in early 2015 when it was successfully funded on Kickstarter. Its launch video attracted wide praise for hilariously parodying the over-the-top nature of ‘90s videogame commercials and developers Pixel Titans have kept up the charade since, especially on this nostalgia-laden website.

Strafecon will be your last chance to grab a free pre-order copy of the title, which launches immediately after on May 9. Taking place on a failing ship in the deepest reaches of space, Strafe puts the player in the role of a scrapper who collects (you guessed it) scrap. This scrap can be used to purchase upgrades from traders who spawn at various points in the procedurally generated levels. Strafe will also be VR enabled for the Oculus Rift, allowing players to really get stuck into that gory goodness.

You can sign up for Strafecon over at the official website which also contains a list of participating streamers. The game itself can also be pre-ordered on Steam for $19.96/£14.99.