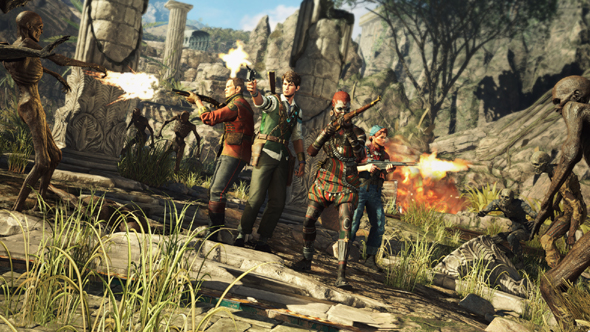 Sniper Elite and Battlezone developer Rebellion have announced that Strange Brigade, the spiritual sequel to their Zombie Army trilogy of co-op shooters, will launch on August 28. Pre-orders are available today, and there will also be a special boxed Collector’s Edition – although, disappointingly, that will only be available with console versions of the game.

Will Strange Brigade be good enough to make our list of the best co-op games on PC?

Those who pre-order the game will receive the Secret Service Weapons Pack, which, according to Rebellion, consists of “the butter-smooth Wilkers & White P19 pistol, the piercingly precise Stoudenmire 960 submachine gun, and the punch-packing, one-of-a-kind Gehrig-Delgane S1 rifle.” These will be usable by all characters.

While the Collector’s Edition isn’t available on PC, there will be a Deluxe Edition of the game, which contains Strange Brigade and its DLC Season Pass. We don’t have any specifics regarding the contents or price of either the Deluxe Edition or the Season Pass, but it will include new missions, items, and weapons.

Strange Brigade is set in the 1930s and is more colourful and adventurous than Rebellion’s Zombie Army Trilogy, following a team of up to four Indiana-Jones-like explorers through dusty Egyptian tombs searching for fortune and glory. We’ve previously referred to it as “Left 4 Mummies,” so hopefully the game will stand up to that exciting but slightly clumsy moniker.