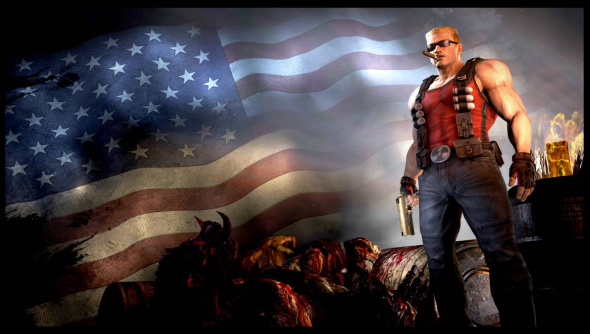 The tale of Duke Nukem seems to go on forever, doesn’t it? Gearbox are suing 3D Realms, the game’s original developer, and a studio called Interceptor for violating the IP Gearbox bought in 2010. What’s stranger is that, according to Gearbox, since 2010 3D Realms have been telling companies that they never sold the IP and that they’re free to develop Duke Nukem games.

This is all going to take a little unpacking but it’s a fascinating story.

On 21 February Gearbox filed a suit against 3D Realms and Interceptor for trademark infringement, unfair competition, copyright infringement, and breach of contract. This is because Interceptor are planning on releasing Duke Nukem: Mass Destruction, “A top-down action role-playing game for PC and PlayStation.” In it “Duke Nukem kicks ass across planets in an Unreal Engine-powered galactic adventure to save the President from an apocalyptic alien threat.” 3D Realms gave Interceptor their blessing to make the game.

Gearbox take issue with this because they bought the Duke Nukem IP in 2010 and say that they own the exclusive rights to commission or produce Duke Nukem content.

Gearbox say that “Apparently, after selling its Duke Nukem IP rights to Gearbox in 2010, 3DR sought to privately convince others that the sale never happened.

“Unfortunately for Interceptor—and any others who have relied upon 3DR’s personal assurances in lieu of federal registrations and the like—the 3DR Declaration makes it clear: 3DR no longer owns the unrestricted rights to Duke Nukem IP,and 3DR has no right or ability to make any agreements in violation of Gearbox’s exclusive rights.

“By attempting to license the unlicensable, assign the unassignable, and effectively re-sell the exclusive rights that Gearbox already purchased in 2010, 3DR breached the terms of its Asset Purchase Agreement with Gearbox, as well as Gearbox’s exclusive, federally-protected intellectual property rights. Unfortunately, the 3DR-Interceptor maneuver has left Gearbox with little choice but to bring these claims.”

I’ve read a fair few court documents and this one’s tone is different from any other I’ve come across. Gearbox seem almost baffled by 3D Realms and Interceptor’s actions.

I’d be baffled, too, 3D Realms have admitted they’re in the wrong.

On 13 February, Gearbox sent 3D Realms a cease and desist letter, demanding “that 3DR and its abettors halt all unauthorized exploitations of Gearbox’s Duke Nukem intellectual property.” The letter was friendly but explicit “No developer reveres Duke Nukem and its fans more than Gearbox; it’s why Gearbox committed so much to rescuing Duke back in 2010. As you well know: 3DR’s rights were reduced under the terms of that rescue, not expanded. […] 3DR’s actions breach the Duke IP Terms.”

Three days later 3D Realms owners, Scott Miller and George Broussard, replied, admitting that “neither 3DR nor anyone else possessed the right to develop and publish the ‘Duke Nukem: Mass Destruction’ game . As such, 3DR promised to ‘refrain from any acts that use or violate the Duke IP, which exclusively belongs to Gearbox.’” Also that Miller and Broussard are aware that all future Duke Nukem games “is a development right exclusively held by Gearbox. As such, only Gearbox has possessed the right to use the Duke IP in the development of any and all new Duke Nukem games, ancillary projects and materials since February 2010. Because such rights belong to Gearbox alone, development efforts such as 3DR’s ‘Duke Nukem: Mass Destruction’ effort with others was not only unauthorized, but a material infringement of Gearbox’s rights.”

The two go on to “apologize to Gearbox for the infringement and breach represented by my efforts.”

So they admit that they were in the wrong, yet the game still heads for its release on 25 February. Hence the lawsuit.

We’ll be keeping our beady on this this one, I want to see what happens on Tuesday when Mass destruction is due to be released.