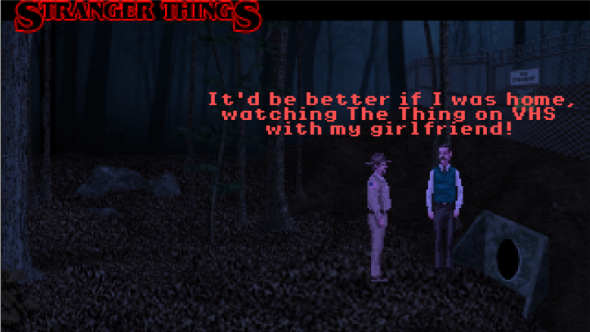 Netflix smash hit Stranger Things continues the ’80s-inspired spread across every form of media with a fan-made adventure game in classic LucasArts style.

The game, developed by indie outfit Infamous Quests, is a single room point-and-click adventure pitting the player as Chief Jim Hopper as you look for missing child Will Byers. Set in the woods around the Byers home, Hopper can talk to a few of the other adults including deputies Powell and Callahan and science teacher Mr Clarke.

Though lacking in characters and settings, the single scene pastiche shows the sort of treatment a series like Stranger Things could have received it were, as its entire vibe suggests, conceived in the LucasArts heyday.

As it is, you can wander about the possibly monster-infested woods, looking at items with a faintly humorous internal or external monologue and choose from some fairly ham-fisted dialogue attempts to convey references to the show. If you’d like toplay Stranger Thingsfor yourself then head to the itch.io page for Infamous Quests.

H/t to Wiredfor chatting to the devs, too, if you’d like to hear their eighties influences.