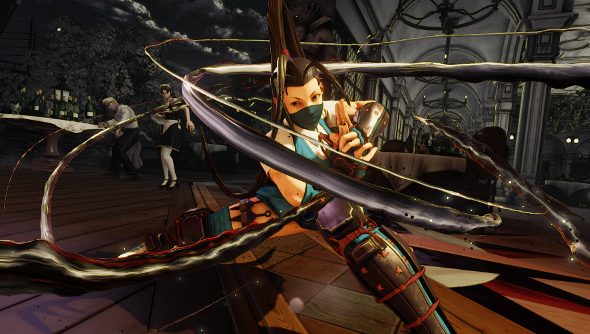 Update Jun 1, 2016: Capcom have confirmed via Twitter that Ibuki won’t be launching until the end of June.

A few hours after our post last night, Capcom confirmed on Twitter that not only was Ibuki launching at the same time as the story mode, but wouldn’t be available until the end of June. This is a month late by the original DLC plan, but there were “unforeseen delays.” In a series of tweets from the official account, they also thanked people for their continued support and said a blog post would be available in the coming days.

The launch version of Street Fighter V didn’t quite make it into our list of the best PC games 2016 – would an updated one?

Here’s the first tweet in the string, confirming the delay:

We wanted to clear up the confusion around the release of Ibuki in #SFV. She will be released alongside Story Mode at the end of June.

As for the further communication, the blog post will discuss the delay, as well as other community topics and the plans for June, and should be up within the next 48 hours or so. If you desperately need more Ibuki, here’s the archive of last night’s Winner Stays On sessions featuring her and various top Ibuki players from the SF4 and 3S eras:

Original story May 31, 2016:The latest Street Fighter V character will be Third Strike’s Ibuki, joining the cast after a stint in Street Fighter IV as a kunai-throwing, bomb-packing ninja. However, despite Capcom’s plan to release one DLC character a month, she won’t be releasing in May and will join the urban brawling some time in June – at the same time as the Cinematic Story Mode, according to the Japanese Capcom site.

First up, here’s how Ibuki’s transitions into the world of V-triggers and Critical Arts:

She manages to look both true to her original form and less stunningly spammy and random than her Street Fighter IV incarnation felt. Not that she didn’t take skill, it just often felt like every time she hit you whether you blocked or not was more up to a roll of the dice than any decision you could have made. Was she coming left or right, low or high? No real way to know.

So she looks and probably plays great, as with the rest of SFV’s colourful cast, but her timing is less stellar. She was meant to come out this month by the original DLC plan, and has been delayed into June. The Japanese version of her announcement post says she’ll be coming at the same time as story mode, while the English version makes no mention – though do check there for a breakdown of her skills and moves.

Meanwhile she will be on the Winner Stays On livestream tonight, as announced by host Logan Sama on Twitter today. This will be on the official Capcom Fighters Twitch channel in about three hours at 20:30pm BST / 12:30 PDT. While the delay to actually play as her may only be a few days, most are critical of the lack of communication from Capcom about the issue – she’s clearly not hitting today, which means she’s late, and they should let people know why.

As you can imagine, the anger has been disproportionate but at least somewhat justified. While it’s likely many would prefer Capcom had taken a bit longer with every aspect of Street Fighter V’s troubled launch so far, they also don’t like not knowing what’s going on, especially when a bunch of folks will be playing the character they’re waiting for on stream later today. Expect an update from Capcom soon.