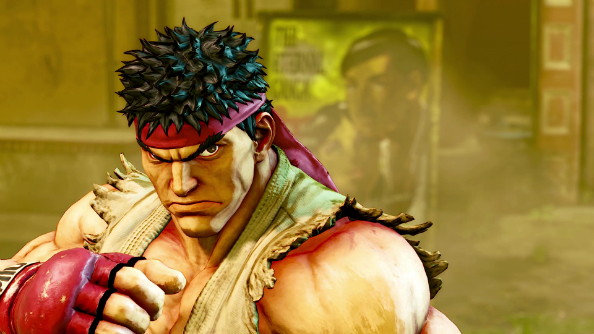 Street Fighter V releases on February 16, which means very shortly the worlds of both PC and PS4 will be awash with stylised watercolour violence and peope trying to come to terms with what Ken looks like now. It’s very difficult to imagine that the finely tuned gameplay systems powering all those fights will be anything other than excellent, but the real question is: how does it run on PC? That’s where PCGamesN come in, poking and tugging at its graphical options like excited children around the patient family dog.

Here’s the great thing about Street Fighter V, and it was just as true of its predecessor on PC: it looks wonderful, and requires very little from your system. The system requirements Capcom released way back in September 2015 are testament to that.

The bare minimum Street Fighter V requires to run is an Intel Core i3-4160, 6GB of RAM, and a GeForce GTX 480. Recommended specs are a bit more demanding, but still below the current average -Intel Core i5-4690K @3.50GHz, 8GB of RAM, and a GeForce GTX 960. Our own system falls just below the recommended specs (certainly in terms of age, if not outright processing power), but we’ve found it to run at an unwavering 60 fps at all times.

That means two things: firstly, that you can take those recommended specs with a pinch of salt and shouldn’t be disheartened if your rig falls a bit below it. Secondly: it’s running at a locked 60 fps, with no option to remove the frame limit in the game itself.

We’ve been tinkering with the engine.ini file found here:

…looking for an obvious “FrameCap = True” entry or similar and haven’t found anything that allows frame rates above 60 so far. We’ll keep trying, though.

Given that Street Fighter 5 runs at a rock-solid 60 fps with all graphics options maxed out, lowering those options doesn’t tell us much about potential perfomance benefits. What it does show, however, is the fidelity difference between each graphics setting preset. Speaking of, let’s take a look at the graphics settings now: 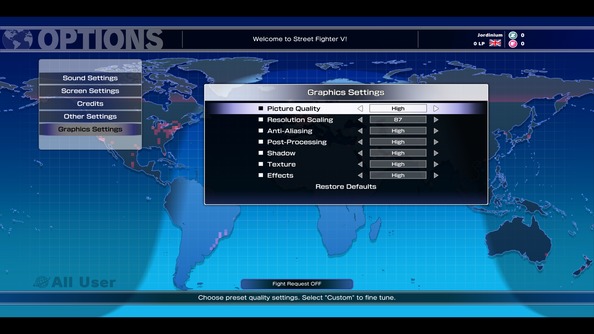 Above are the full range of customisable graphics options. Like the broader Street Fighter design philosophy, it’s… streamlined. Barebones, even. There’s no v-sync option here, nor any choice of anti-aliasing techniques – simply ‘low,’ ‘medium,’ high,’ and ‘max.’

That’s how it goes for the other options. Of particular interest is resolution scaling, which is used to keep the game outputting at your monitor’s native resolution but lower the image sharpness to increase performance. This can’t be boosted beyond 100% though, so it doesn’t work like downsampling – it can’t sharpen texture resolutions to those higher than your monitor’s output. Only lower.

Points must be awarded for allowing the player to change all graphics options without requiring a restart, and further points for those changes being reflected in the game menu behind you. The difference between ‘low’ and ‘max’ presets is stark, even when observed on a 2D world map.

There’s also an ‘automatic’ preset which adjust settings based on yours specs, and a ‘custom’ preset where you’ll get to change all the individual options manually. 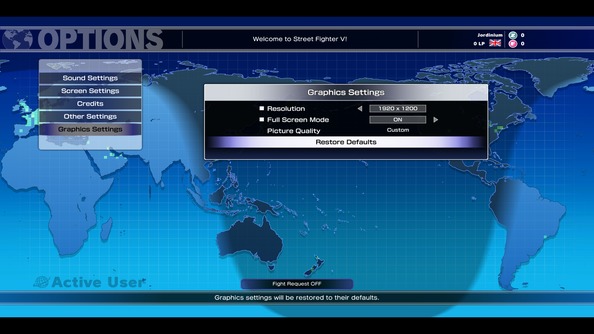 There’s also this resolution select screen, which inlcudes a fullscreen/window mode option. Pretty minimal graphics tweaking is on offer, then.

That’s to be expected, given both the genre of the game and its console heritage (I know you exist, PC fighting game community, but you’re not the bigger crowd). In terms of fast and consistent frame production, fighting games might be the only genre to rival competitive shooters for emphasis and importance.

You need to be able to read animations within their first few frames. No one wants to lose round after round staring at a beautifully rendered 24 fps scene, so SFV’s options are accordingly focussed on getting you to that golden locked 60, rather than maxing out your graphics card’s capabilities.

Competitive playing also being at the fore, perhaps the locked 60 is also a means of levelling the playing field a bit. That said, a v-sync toggle would have been nice. Scanning the game’s .ini files reveals a few ‘FrameSmoothing’ entries, but we haven’t found editing the variables to have a noticeable effect in-game.

Before we dive into the graphics presets and how they affect the game’s visuals, it’s important to re-emphasise that the game looks gorgeous because of its art direction and animations, not because of a slew of advanced post-processing effects. It’s by no means a disaster, then, if you have to drop down to the medium preset.

Let’s take a look at the game running with all graphics options maxed out: 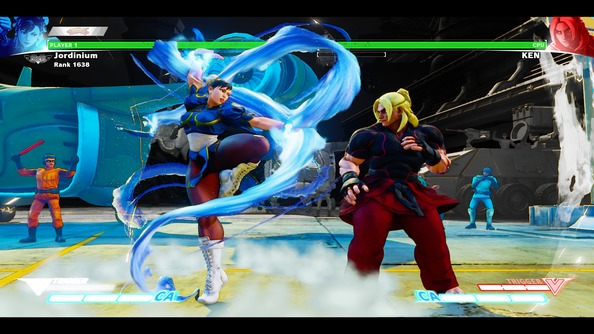 Here’s Chun Li about to throw down on the newly redesigned Ken for having the gall to turn up to a fight with a man-bun. It’s incredibly tricky to take like-for-like images in such an animation-crammed game, and SFV doesn’t allow graphical option customisation mid-fight, so we’ve retreated to training mode to analyse the fidelity of each preset.

As we mentioned before, our modest system can run this scene at a flawless 60, and that’s a great result. It suggests an engine well-optimised for PC. It isn’t hugely surprising though, since there are only ever two high-poly characters on screen at any time, and only a sparsely populated background with lower detail objects for your GPU to worry about behind them.

The AA is doing its job well here, and the smoke effect around Chun Li’s feet isn’t having the slightest impact on frame rate. You can see the effect that Chun Li’s Trigger is having by casting light on her character model. Though the shadows are almost obscured in that screen, you can get an idea of their blurriness and detail by checking out the bigger version.

The only negative takeaway from this shot is the letterboxing occuring at 1920 x 1200 resolution. Since there’s no option to adjust the aspect ratio, we’re stuck running the game at 1920 x 1080 with black space at the top and bottom of the screen.

Next, let’s drop down to ‘high’ settings: 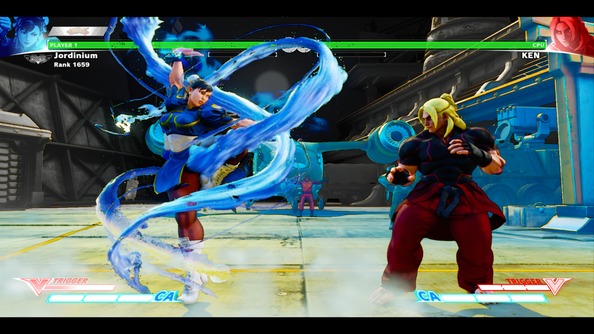 As we lower all graphics option from ‘max’ to ‘high,’ it’s actually the resolution scaling that has the biggest impact on fidelity. It’s dropped down to 87% of the native resolution, which makes the final image that bit grainier. It’s especially noticeable on our monitor because the locked aspect ratio means we’re already down from our 1920 x 1200 to 1920 x 1080.

That’s most noticeable in the UI and text, although you can also see increased blurriness in Chun Li’s face. The lightning-fast animations produce a lot of blur in screenshots at the best of time, but that’s accentuated when the resolution’s also being scaled down. We’d advise you keep the scaling at 100% and instead manipulate the other graphics options to increase performance.

Generally, the difference between ‘max’ and ‘high’ is subtle. The visuals don’t fall off a cliff as we drop down to medium, either: 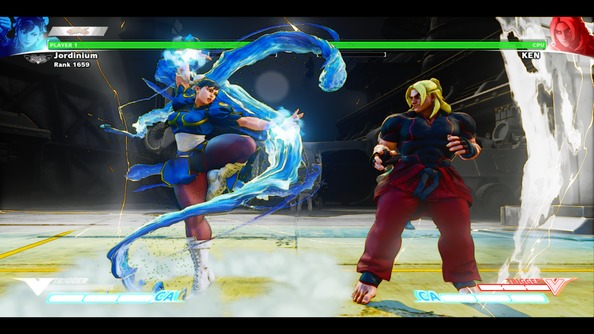 The obvious difference between these screens is in the background scenery, but it isn’t related to the graphics options. The planes visible at ‘max’ and ‘high’ just haven’t landed yet in this particular randomised scenery animation.

The graphics options-led changes are a bit subtler. The smoke around Chun Li’s feet is a bit simpler in this instance, and the effect of her Trigger lacks a bit of definition. The specs of colour in particular appear blurrier, while the AA’s having to work that bit harder to avoid jaggies at such a reduced resolution scale. Ken’s shadow has also been simplified slightly.

The most noticeable change in fidelity comes when dipping from ‘medium’ to ‘low’ preset, though: 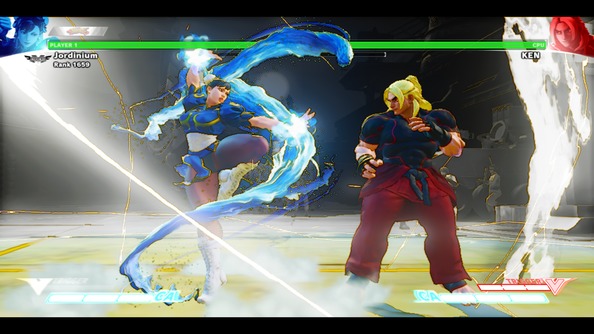 It’s at this point, with the resolution scaled down to 50% and all options running at their lowest, that you could make the argument it’s possible to get SFV looking like SF3. The pixellation of everything in the 3D scene, alongside the blurriness of te UI, are a marked difference from ‘medium’ and above.

While all presets result in a locked 60 fps on our system, we can speculate with reasonable assurance that this configuration will produce a playable frame rate on anything more advanced than a potato alarm clock.

Character models still look great. That wonderful watercolour-meets-claymation art style that has defined the series since SFIV is intact. The animations and effects are still as Capcom intended. Really, the trade-off is a graininess to everything on-screen, and a blotchy effect resulting from the AA being stretched too far (while also operating at its lowest preset).

So, does it get the pass? It’s hard to see why it shouldn’t. Most importantly, the frame rate absolutely flies at all settings on our just-below-recommended specs. Secondly, it still looks great as far down as ‘medium’ presets. That’s really all PC players need to know before taking the plunge.

The graphics options aren’t comparable to a CD Projekt RED game, true, but they also don’t need to be. On a technical level, Street Fighter V does a good job of giving PC players the best chance to experience the game at the intended 60 fps, and letting its wonderful art direction do the rest.