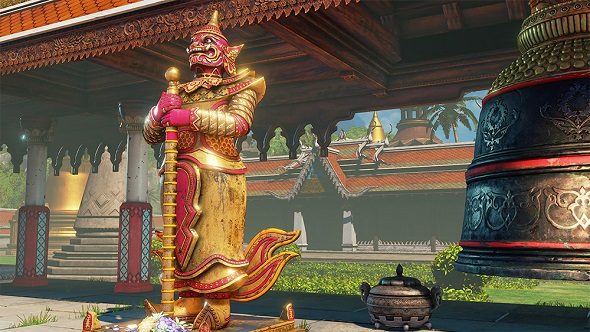 Capcom’s having a bit of a tough week. Outside of Marvel vs. Capcom: Infinite news leaking twice, the new Thailand stage had to be taken off the in-game store due to issues with its background music. Rather than having Thai chants as part of its BGM, the chants were actually lines from the Quran. Oops.

For those looking to test their competitive skills, have a gander at these PC multiplayer games.

Released back on Tuesday, the stage was taken off the marketplace as Capcom noticed the “unintentional religious references”. They released a brief statement yesterday, “sincerely apologising” for the chanting and promising to replace the BGM as quickly as possible. As a result,an update was released earlier this morning, removing the offending track from the game and replacing it with M. Bison’s character theme. Capcom have not announced when they will be releasing an updated version of the Thailand stage BGM, but expect any news to come via the Street Fighter V Server Twitter account.

The original music track is still available online, with the chanting audible throughout. This is not the first time fighting games have come into trouble with accidental references to the Quran and Allah. Tekken Tag Tournament 2’s Saudi Arabia stage initially had the word Allah emblazoned on the floor of the arena, causing the development team to patch the stage and remove the reference. The beta version of The Legend of Zelda: Ocarina of Time also had Islamic prayers within the music for the Fire Temple, prompting a change before the worldwide release of the game.

Hopefully, the new Thailand stage music will include Thai chanting, as well as the famous bell from the original Street Fighter II track. Also, add Sagat while you’re there, we all miss him.