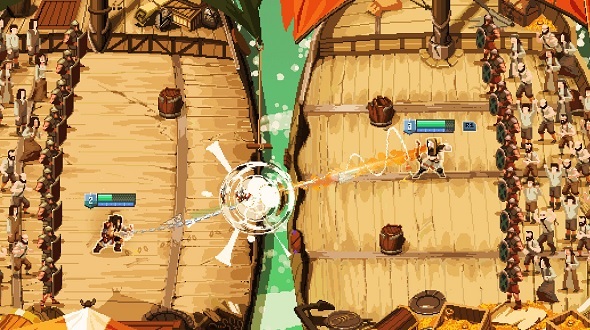 Strikers Edge is dodgeball but not like you know it. Being set during medieval times means that Strikers Edge’s take on dodgeball is much more violent than the well-known playground sport you’ve probably played. It involves warriors, spears, and yes, blood.

If you are after the best free PC games we have a big ol’ list for you to browse – go ahead!

While that may seem violent, Strikers Edge is realised in animated pixel art, making the gore of an impaled spear just a few red squares on the screen. It’s almost pleasant. This isn’t a game about ripping people apart, after all – well, unless you mean ripping apart the competition.

Strikers Edge is all about getting people together, online or in local play, duking it out to see who comes out on top. You’re given stats after each match as well as leaderboards to climb if you so wish. You can play in1v1and2v2 matches, choosing from eight different strikers, each with the own abilities and weapon, trying to out dodgebrawl your opponents.

The full game is out on January 30th. But, before then, the developers are hosting a closed beta event to give Strikers Edge one last run through the mill to check that everything is working right. You can be part of that, and all you need to do is grab a Steam key by completing one of the actions in the widget below.

There are 5000 keys in total so make sure you tell your mates about them as there are plenty to go around. You want to throw a spear at your best friend and cackle as their body is pinned to the wall, don’t you? This got dark real fast…