Many miles from here, in a closed drawer in my childhood bedroom, there’s a copy of Stronghold: Crusader that I borrowed from a friend and never gave back. But that’s no place for the original castle-keeping sim. Better to have the upgraded sequel, released last year with a 3D engine and battlements that crumble in accordance with the laws of physics, sat in your Steam library.

As luck would have it, we’ve got five codes for Crusader 2’s comprehensive new Ultimate Edition, worth $79.99, and another 10 for The Jackal & The Khan, Firefly’s $5.99 DLC campaign centered on wild warlords.

The Ultimate Edition unlocks on Steam today. It comes with four DLC packs, two extra mini-campaigns, digital art book and soundtrack, the original Stronghold Crusader in HD, plus another copy of Crusader 2 to lend to a friend who will never give it back. The Jackal & The Khan, meanwhile, incorporates nine missions and two leaders: the vengeful Jackal, who dates back to the very first Stronghold, and the nomadic Khan. 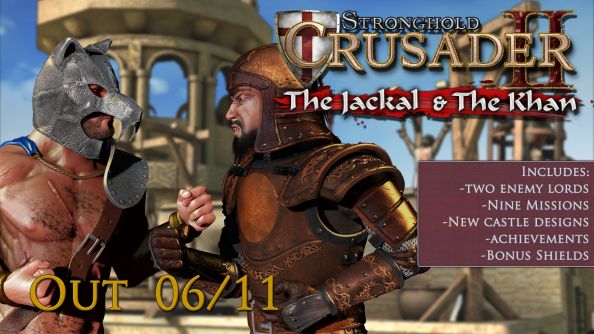 If you know the difference between a palisade and a portcullis, or would like to, use the widget below to follow us on Twitter or visit the homepage. The more ways you bop it, twist it, pull it or spin it, the higher your chances of landing a code for either the Ultimate Edition or the DLC in your inbox. And we promise not to run away into the sunset with your email address – it’ll only be used for this giveaway.

Give us a Like on Facebook if you want to hear about future competitions. That is all – siege you on the other side.