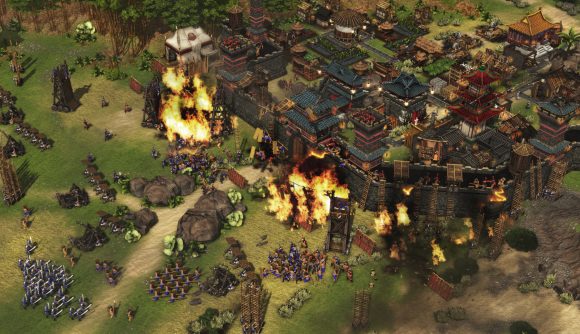 The start of the year is always a bit of a dry period, but the ongoing global health crises seems to be exacerbating the issue when it comes to new game releases. In strategy-land alone, we’re not really expecting anything profound to release until Humankind in April. One thing we were looking forward to at the end of January was the release of Stronghold: Warlords.

We say ‘were’, as it’s now been delayed by six weeks until early March. It’s a good thing we haven’t just written up a guide to all the cool games coming out this mo- oh no.

The delay is due to some issues that the team at developer FireFly found with multiplayer in a recent stint of beta testing. There’s not enough time to resolve the problems with the time they have, hence the delay. They can’t exactly postpone the multiplayer mode either, as they’ve been promising it would be included at launch for a while now. It’s a shame, but probably for the best in the long run.

Here’s an excerpt from the announcement, for added context:

“The reason behind this is that the game’s multiplayer mode is simply not ready to be released yet. We have run into some unexpected issues with it and, while we have worked very hard to resolve these with our current deadlines, we need more time to iron them out. We want to be as transparent as possible with you about this and we did consider releasing as planned, delaying multiplayer to go live in a future update. However, as we have promised multiplayer functionality for Stronghold: Warlords at launch for over a year now, releasing without it wouldn’t be fair to players.”

It’s easy to appreciate the desire for caution and to ensure that they get things as good as possible. Stronghold: Warlords is the first ‘new’ entry in this franchise since 2012’s Stronghold 3 which wasn’t received that well. In 2014, FireFly released a sequel to Stronghold: Crusader which was fared better, but essentially this was a redo of the most popular of the original run of castle-building sim games. Other than modernising the original concept, it didn’t try anything especially new.

While you wait: The best city building games on PC

Warlords takes the series to the far east for the first time, focusing on nations and people it’s never done before, many of whom approach the concept of a castle-based society very differently. It also adds a new mechanic in the form of minor NPC ‘warlords’ that you can control and compete over. We can imagine without a working and robust multiplayer scene, the potential of some of these new features may be limited.

Stronghold: Warlords will release on March 9, 2021.