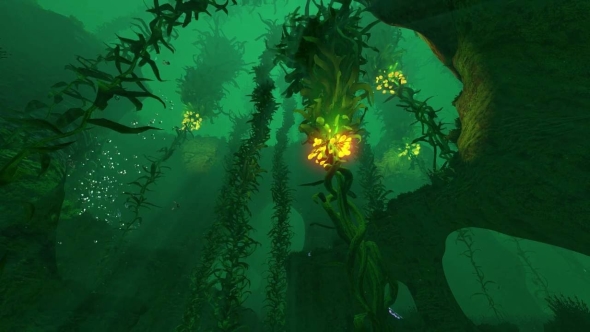 A Subnautica time-capsule hinting at the existence of an arctic biome has been found. The capsule, put together by the game’s narrative designer, is titled ‘It’s Getting Cold Outside’.

Terrified of the ocean depths? Check out our Subnautica guide.

Subnautica’s time capsules were added to the game in the recent 1.0 release. They allow players to leave messages to players in other worlds, who may find the capsules hidden beneath the waves. One of the first notable ones of these to be discovered was that of technical artist Brian Cummings, who shared his early vision of the world’s underwater map in his capsule.

Another developer capsule has now been discovered, this one belonging to Tom Jubert, who also worked on The Talos Principle, The Swapper, and FTL. As well as some book recommendations and a quick dedication to some other writers, Jubert adds a brief note to the bottom of his time-capsule entry – “PPS We’re not done with 4546B. Winter is Coming.”

I’m going to take a moment to assume that that’s not a clue to an upcoming Game of Thrones crossover. 4546B is the ocean planet that Subnautica is set on, and the discussion about the time capsule on Reddit says that an arctic biome has already been hinted at in the game, so it looks as though whatever comes next for Subnautica will be heading north.

We’ve known about the possibility of new biomes for a while. Exactly what form they’ll take, or when (and even how) they’ll arrive isn’t yet known, but it’s safe to say that those tropical waters you land in at the beginning of the game are about to give way to something much colder.