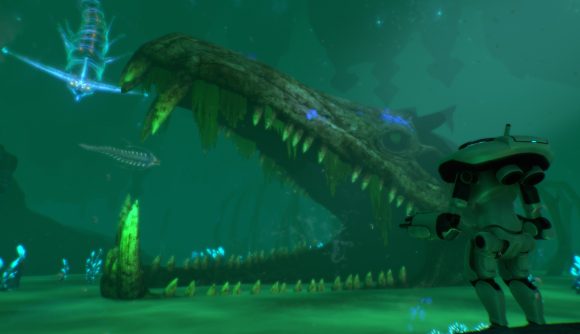 Subnautica is free to claim on the Epic Game store, and you’ve got a full 14 days to claim it. The underwater survival game will be yours to keep if you pick it up at any time during that period, and once it’s installed you don’t even need the Epic client to launch it. This is the first of a chain of giveaways planned to continue until the end of 2019.

You can grab Subnautica via the Epic store until until December 27 at 20:59 PST / 23:59 EST or December 28 at 4:59 GMT. Once that giveaway is done, it’ll be replaced by Super Meat Boy on December 28, which will be free to claim for another two weeks. These rotating two week giveaways will continue until 2019 is done, though Epic hasn’t detailed what titles are coming beyond these first two.

Quick word of warning – make sure you skim the fine print as you click the install button. There’s a box about receiving marketing info from developer Unknown Worlds, and you’ll need to check it in order to not receive those emails. Yes, it’s just as confusingly worded on the store itself. If you don’t want emails, check the box.

While that detail is somewhat frustrating, you can forget about the Epic launcher once Subnautica is installed. I’ve just tested it here, and you can run the game directly from the executable without the launcher on. It seems this is how it’ll work going forward according to Epic’s Sergey Galyonkin on Twitter, and you can expect DRM to generally be even lighter than Steam’s – though developers will likely be free to include their own third-party solutions.

Read more: Everyone loves free stuff, and you can get more with the best free games on PC

Unknown Worlds is likely eager to get Subnautica out to new fans, as the Below Zero expansion hits Early Access next year – not this year, as was initially planned. Epic, meanwhile, is invested in getting people to play games beside Fortnite through its launcher, and free stuff is always a nice incentive.