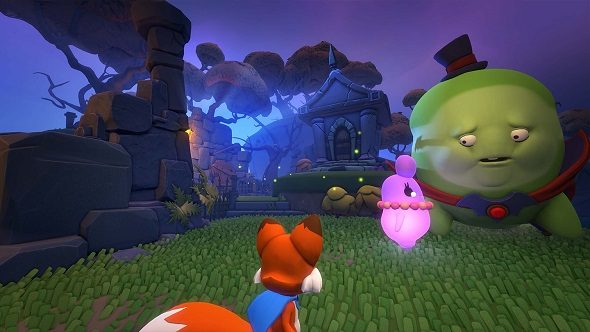 One of the most sweet, wholesome, and lovely trailers to come out of Microsoft’s E3 2017 press conference was for Super Lucky’s Tale: a traditional 3D platformer filled with bright colours and farting onions. It’s also coming out pretty soon, November 7 2017.

This was announced for E3, check out all of our E3 2017 coverage right here.

If the main character seems familiar, that’s because this is the sequel to Lucky’s Tale, the game designed for the Oculus Rift. There was no mention of Oculus Rift or other VR compatibility, so hopefully it won’t require anything extra.

The story is pretty much as you’d expect. The main character, Lucky, has to save the world with his sister from Jinx, who stole the Book of Ages so that he could do evil, villainous things. The protagonist is also an anthropomorphic fox, and the music is upbeat orchestral tracks – it really does tick the box of every cliché.

But, that’s the cynical view – some of the characters that are shown off seem cute and unique, with environments across a bunch of different styles. It’s not showing off any groundbreaking technology, but as a new, fun, and simple platformer, it’s showing off the right stuff.

It’s coming to PC as a Play Anywhere title, and so will be arriving on PC in some fashion at the same time as its Xbox One counterpart later this year.