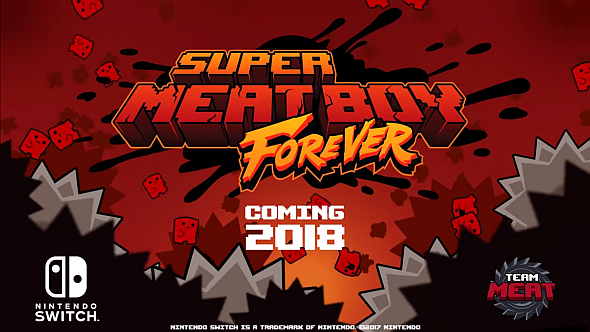 For more publisher-free risk-taking, sample some of the best indie games on PC.

Super Meat Boy Forever was first announced in 2014 as, primarily, a mobile game with a Steam port, but has been in development hell for a while.

The new version was (re)announced via Nintendo’s stream at PAX West. It’ll debut on Nintendo Switch, but devs Team Meat confirmed to Eurogamer that it’s still coming to PC (and mobile, and other consoles).

It got its name because each stage can be replayed endlessly, and will get harder with every new visit. You can also compete with your friends, and probably the masses of the internet, to post the best score in daily challenges.

The plot has moved on, but the premise hasn’t: you’re still aiming to rescue a loved one, but this time it’s Nugget, Meat Boy’s child by girlfriend and former damsel-in-distress Bandage Girl. Dr Fetus is, once again, the kidnapping antagonist.

A brief flash of gameplay is shown in the announce trailer above. It’s the kind of slick, demanding platforming you’d expect, but with a couple of new wrinkles. For one, Meat Boy can punch now – you’ll use this not only to take out enemies, but to throw yourself across gaps.

For screens and more details, check the official website. You can pick up the original Super Meat Boy on Steam herefor£10.99 ($14.99).