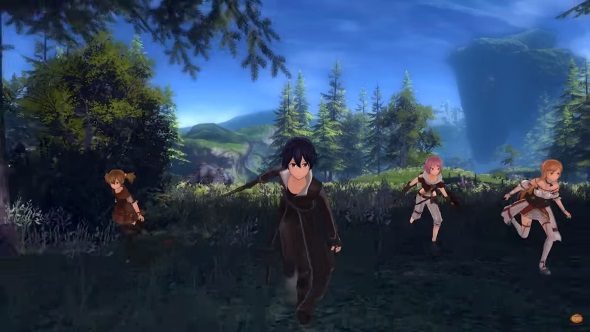 Less than a month ago, we reported that Sword Art Online: Fatal Bullet was coming to PC in February next year. Bandai-Namco are clearly trying to get PC gamers on board with the anime/light novel franchise, as yet another (single-player) Sword Art Online game is headed our way, due in less than a week.

Think you’d rather play an MMO than a meta-narrative story about them? You’re spoilt for choice.

It used to be that JRPG releases on PC were rare and unusual things. So rare in the late 90s/early 2000s that PC developers started making their own, bringing us the likes of Anarchronox. Now it seems like publishers aren’t just rushing to get every Japanese title onto PC, but port a lot of their back catalogue to the platform as well.

While Sword Art Online as a whole tells the story of a band of gamers dragged into some sinister internet conspiracies, Hollow Realization takes part during the first season of the anime, set in and around a traditional fantasy MMORPG. Fatal Bullet, due early next year, represents the second half of the story, with its sci-fi, shooter-style game setting.

As you can see from the trailer, Hollow Realization isn’t too much to look at, although that’s understandable given its origins as a Vita game. A platform that ports elegantly enough to PS4 and PC, although the simpler graphics on 3D Vita titles often betray their handheld roots.

The PC release of the game will be considered the definitive edition, and include all the DLC from its original Japanese release, including the multi-part Abyss Of The Shrine Maiden story expansion, which is a nice perk, too.

The PC release is set for Friday, October 27th, and will be Steam exclusive, although no store page is yet listed. No price has been announced, although the PS4 version carries an RRP of £45/$60