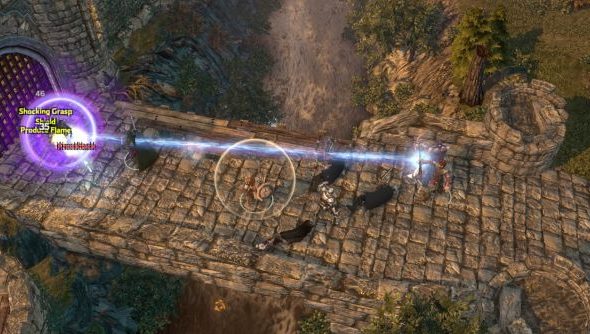 Sword Coast Legends might sound nondescript enough to the untrained ear, but the name is a series of keywords hand-picked to flare the nostrils of Baldur’s Gate fans. Not only have n-Space set up camp in the same D&D region as BioWare’s debut RPG, but early screenshots indicate they’ve looted its isometric camera and real-time-with-pause credentials too.

Legends will join Pillars of Eternity and Beamdog’s Adventure Y at the fore of the ‘90s revival now outdoing the actual ‘90s. There are two things that distinguish this period RPG from its peers, however. First, the presence of Dragon Age: Origins chief Dan Tudge at the helm. And second, a determination to pin down a part of D&D that’s rarely made it off the table in 40 years of adaptations: dungeon mastering in multiplayer.

During the development of Dragon Age, the team at BioWare often referred to the game as a “next-gen Baldur’s Gate”. But the end product, brilliant though it was, wasn’t so much more advanced as more expensive: a blockbuster Baldur’s Gate.

“For so many years in game development, it’s really been about chasing the blockbuster,” said n-Space president Dan Tudge. “We fell victim to it at BioWare post-Neverwinter Nights.”

It’s odd to consider a ginormous budget a restriction. But the distractions of large-scale production sometimes led Tudge and the Dragon Age team to “lose sight of the prize” – allowing all-consuming considerations like cinematic design to overshadow central systems like combat.

“I think that consumers have proven by voting with their wallets that not everyone wants to play a hundred-million-dollar blockbuster, though we certainly all enjoy them,” said Tudge. “There’s a place for really creative story-driven RPGs that do things like remain isometric, do things like party-based-tactical combat with pause-and-play.” 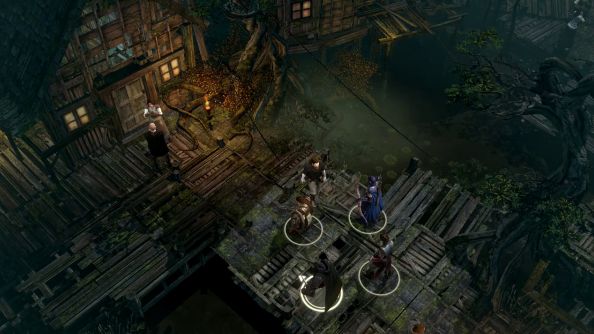 Rather than next-gen Baldur’s Gate, n-Space are shooting for next-stage. Where would the series have gone, had it not been interrupted by the rise of 3D and multi-platform development?

“The core experience of Dragon Age: Origins was very familiar [to Baldur’s Gate players],” said Tudge. “But I think what we’ve done here is really a true evolution. We’re not focusing on creating a copy.”

The early days of BioWare were punctuated by D&D sessions, and pen-and-paper spawned some of Baldur’s Gate’s most memorable characters – Minsc and Boo among them. But the heart of the tabletop game didn’t make it across: one dedicated dungeon master, acting as both guide and supervillain – the conduit between the players and a world described in rulebooks.

It’s an aspect of D&D that’s never been convincingly digitally adapted – though Tudge, a player since 1979, can see plenty of practical benefits. 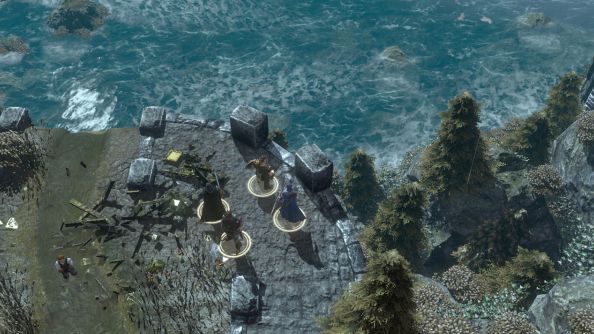 “One of the biggest downfalls, personally for me, was how much effort it took to really be prepared as a good DM,” he said. “The fact that somebody had to belly up to the bar and say, okay, I’ll spend my weeknights preparing a campaign, pre-reading all the modules and being experienced in what happens and getting everything pre-generated.

“That was a very limiting factor, especially as people got older and free time became a real commodity.”

Sword Coast Legends will launch with a four-plus-one-player dungeon crawl mode in which one person will do everything a DM might do: roll for the monsters, tweak the encounters, lock doors, hide secret areas and dynamically change difficulty. They’ll become shepherd and poltergeist to four adventurers.

All this fiddling will happen in real-time, which means nobody has to log into Steam an hour early to set up the game – although a ‘campaign board’ will give them the option to. 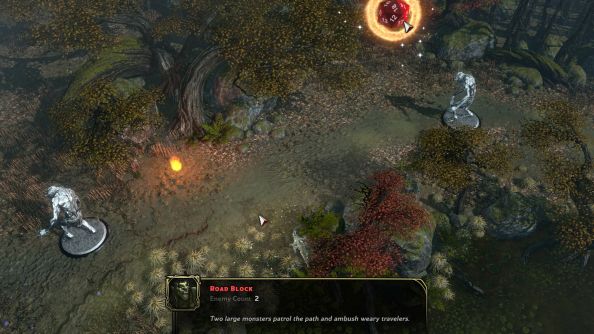 “We’re going to allow DMs to spend a lot of time building campaigns that are near limitless if that’s what they want to do,” said Tudge. “But I’ve got twin eight-year-old boys and I want them to be able to create campaigns, that’s my litmus test. If they can do it, then we’ve succeeded.”

It’s not just the ability of fledgling DMs that n-Space have to worry about, though, but their assumptions too. No sooner had the earliest builds of Sword Coast Legends escaped the office than n-Space ran up against attitudes formed by Left 4 Dead, Evolve, and Fable Legends. In contemporary PC gaming, four heroes and a puppeteer means versus.

“For any core gamer, that was an immediate reaction,” said Tudge. “It’s complex to create an experience where the DM doesn’t feel like it’s really just about destroying the party.”

n-Space won’t stop friends from playing Sword Coast Legends encounters as de facto PvP, if they’re all feeling similarly adversarial. But the studio have implemented lots of systems to make sure that DMs are rewarded for steering the party through an exciting and challenging – though not necessarily overwhelming – adventure. 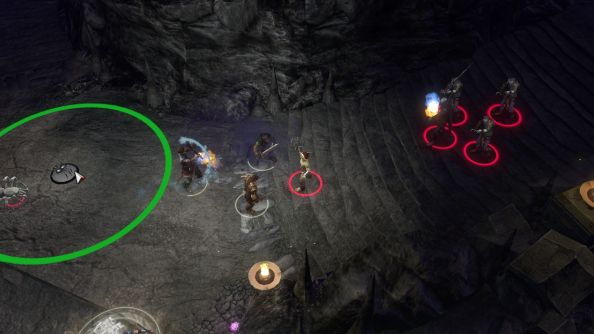 Testers have quickly realised that a straightforward scuffle isn’t nearly as satisfying as pulling a proud party through by the skin of their teeth (or tusks).

“You feel the same pride you do when you’re DMing a tabletop campaign,” said Tudge. “And that’s when we really hit the magic, I think.”

The DM mode is one reason why n-Space are working with brand new tech, rather than the salvaged Infinity Engine behind Beamdog’s Enhanced Editions of Baldur’s Gate and Icewind Dale. But there are others: Tudge is keen on the character customisation and tangible progression offered by 3D character models, and the greater freedom of 3D environments.

“We can make those feel very, very painted, much like the old pre-rendered backgrounds did. But now you have the advantage of being able to rotate around the scene,” he said. 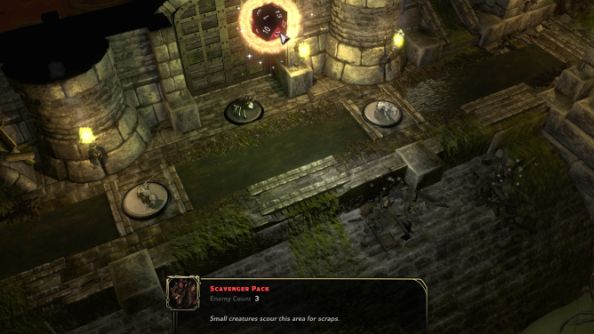 “Dragon Age went into the third person, and we’re staying with isometric – we think that’s where party-based tactical RPGs feel the best. So it still remains in the same lineage, but you get a more robust visual experience.”

The campaign built around that tech will, to hear Tudge tell it, make a virtue of traditionalism. With the Forgotten Realms license loosed from Atari’s grasp for the first time in a decade, n-Space are working directly with Wizards of the Coast – and the D&D custodians are reportedly just as keen as Obsidian, InXile or any of their combined Kickstarter backers to return to the style BioWare pioneered in the ‘90s.

“For [Wizards] that really was their golden era of RPGs, and they definitely are very determined to get back to that,” said Tudge. “We really want to build titles that continue to build on that legacy. It’s not the old-school, throw-the-license-over-the-fence relationship – it’s very much a working partnership.”

n-Space hope players will remember Sword Coast’s companion characters as old friends, like they did Minsc and Jaheira in Baldur’s Gate and Alistair and Morrigan in Dragon Age. The game’s principal writer is Jay Turner, who scribed parts of Origins and Mass Effect 2 and 3. 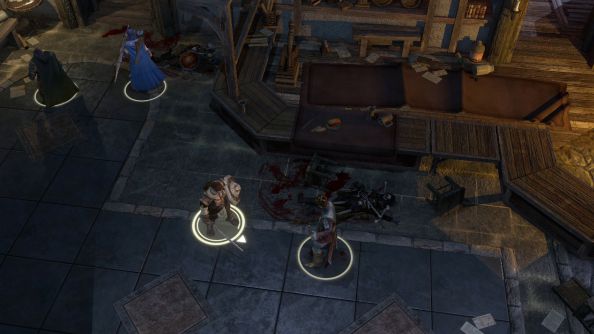 “Some of the hallmarks of those great BioWare stories were those companions, and their reaction to you and the choices that you make throughout the game,” said Tudge. “There are personalities in your party; how you shape those relationships is very important.”

Structurally, they’re pitching for something like Dragon Age or Baldur’s Gate II – games that occasionally funnelled the player to tell their stories but for the most part let us mop up points on the world map (“Some of my most favourite campaigns are the ones where you just strike out into the wilderness,” says Tudge).

Asked if the former BioWare staffers at n-Space might be designing spots along the Sword Coast they’ve already built once before, Tudge is suddenly quiet.

And then: “There are definitely some very familiar areas, and even familiar characters that you’ll meet along the way in this story, but I can’t go into more than that.” 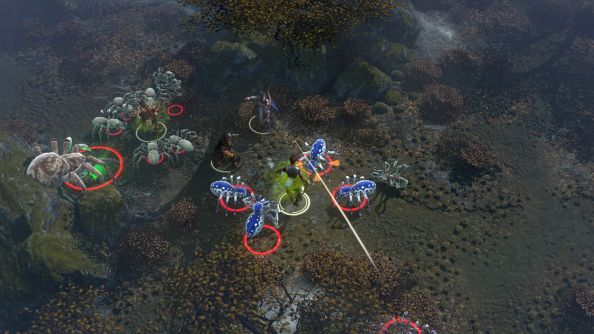 It’s just possible you’ve seen n-Space’s name attached to some of the Call of Dutys on DS; they might seem an unlikely birthplace for all of this. But with the equally unlikely help of Warframe devs Digital Extremes, this 20-year-old studio is finally making the move from work-for-hire to real independence – and establishing itself as a city-state outside BioWare.

“We’ve got a vision for what we’ve wanted to do for years, and the constraints and conflicting goals of a traditional publisher have been removed,” said Tudge. “It’s required a lot of discipline, but we’ve been able to turn and focus more on community and the players and really develop an experience that we all want, without the-”

Tudge pauses. “Well, I don’t want to use too strong of a word, but the corporate overlords.” Another pause. “I guess that was pretty strong.”