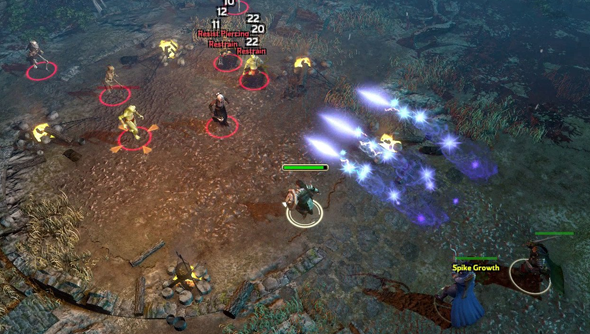 Dan Tudge, the director of Dragon Age: Origins, has teamed up with some of the people behind Baldur’s Gate and Neverwinter Nights to make an Infinity Engine-style RPG in the same world as Baldur’s Gate. Sword Coast Legends sounds almost too good to be true.

The entire game can be played solo, in co-op, or using something the team are calling dungeon master mode. As DM you can create whole new campaigns and take the control seat while your friends explore them, tailoring the world as they play.

Sword Coast Legends is being made in a collaboration between Digital Extremes (the folk behind Warframe) and n-Space, Dan Tudge’s company. Tudge was Dragon Age: Origins’ director so his involvement with any RPG is promising.

Not convinced? Take a look at the trailer:

While details of the story are thin on the ground, you’ll play Sword Coast Legends in real-time, though you can pause combat to issue commands at any point. It’s mechanics are based on the fifth edition Dungeons & Dragon’s ruleset and the team are pulling from its lore and bestiary to fill the game’s world. Expect kobolds. Lots of kobolds.

As well as playing the game in singleplayer, n-Space say that there’s also a 4v1 game mode where one player takes on the role of dungeon master. It’s not really versus, though, instead the dungeon master is tailoring the world to the players.

I’m surprised this is the first we’ve heard of Sword Coast Legends considering its release date is set for later this year. However it looks the part and hopefully we should get a more telling glimpse closer to release.