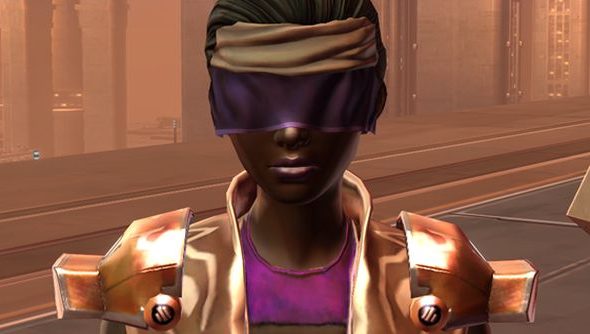 Asking us to write about fashion is like asking an arachnophobic to review a spider. But somehow, tor-fashion.com has grabbed our interest, thanks to the Stars Wars and MMO bits overriding our complete disregard for anything fashion-related. Believe us, we’re the kind of people who regard wearing a seven-year-old dressing gown as being well turned-out. As the name suggests, tor-fashion.com is a place for everyone who’s playing the game to show off their character’s elaborate sartorial choices.

It’s a very niche idea; it shows off just how customisable and comprehensive ToR’s outfits system is. Even though it’s got 169 armour sets listed, the site’s co-creator Kristina “Dulfy” Hunter believes this is only 20 per cent of all costumes available in game.

Dulfy herself used to work in the retail clothing industry, and this combined with a passion for MMOs led to the creation of the site. “Tor-fashion is my idea of place where you can go and view a whole bunch of outfits,” she says. “If you find the ones you like, you can simply look up and see how you can obtain it.”

Costumes on the site are broken down first by the crafting skills needed to create them, such as Synthweaving or Armormech. From there you’ll see the equivalent looks for Neutral, Empire and Republic allegiances modelled on both male and female characters. A nice touch is that hovering over various items of clothing indicates you which level you need to be to get them, as well as any other requirements.

Tor Fashion’s been built in anticipation of Patch 1.3. According to the site, the patch will “supposedly bring augment tables and social gear that adjust to your armour class.” It’s beendubbed the “Orange Revolution”, referring to the orange border that occurs around custom items.

Tor-Fashion has already attracted a lot of positive player feedback. “A lot of people are really excited about the project and I have received a lot of submissions daily from the playerbase,” Dulfy says. “For a lot of people, this is something they have wanted for a long time and it is finally here!”